It was so cool to go to Chop Cult's website and see this on the main page on Sunday: 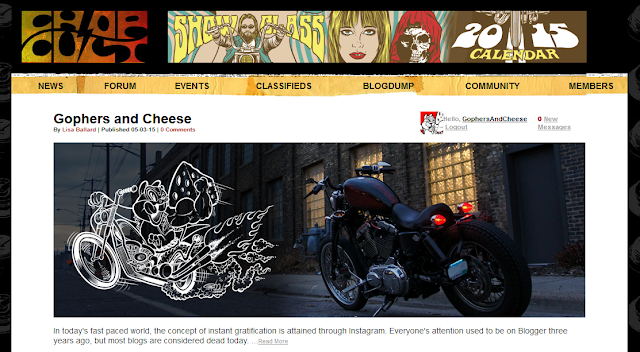 My blog posts have been part of Chop Cult's Blog Dump for a while now but I was very pleasantly surprised when Lisa Ballard reached out to me regarding a feature.  She asked me a few questions and then asked me to send her photos that I felt represented the blog and make me the happiest.  I sent her a bunch from the past few years including:
I didn't go through all my photos to find the most creative or artistic shots.  I didn't simply pick photos of a bunch of local bikes that I thought were cool (well, maybe just a few but I could have easily picked LOTS more).  Instead, I selected photos that all collectively mean a lot to me and hopefully showcase the breadth of content you're likely to find here.  There's a story behind each one.

Lisa wrote up a very nice intro and then the Q&A and photos followed.

To see the whole article including the photos I picked, check it out here:
http://www.chopcult.com/news/articles/gophers-and-cheese-.html