Back in Spring (remember when it was actually warm?), I decided to scrap my Sportster's rear fender and work on a new one.  It was a big decision since I put so much work into the last one.  Here is the one that needed to be replaced: 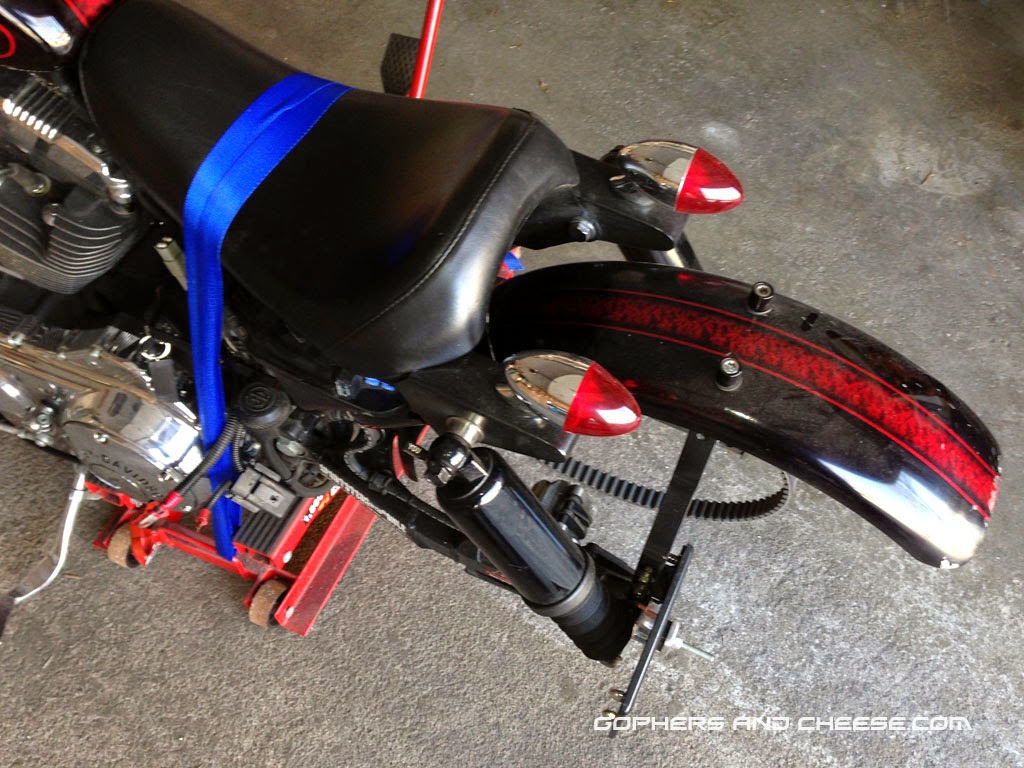 I bought the bike used, but practically stock, back in 2006.  I chopped the stock rear fender and ran it that way with a homemade sissy bar for a while but the gap between the tire and fender bothered me and when the sissy bar finally snapped, I went to the swingarm-mounted fender setup you see above and ran it that way since 2012.  The fender was pretty much a trailer fender but was intended for motorcycles.  I made the brackets myself.  I did the whole thing with zero welding. 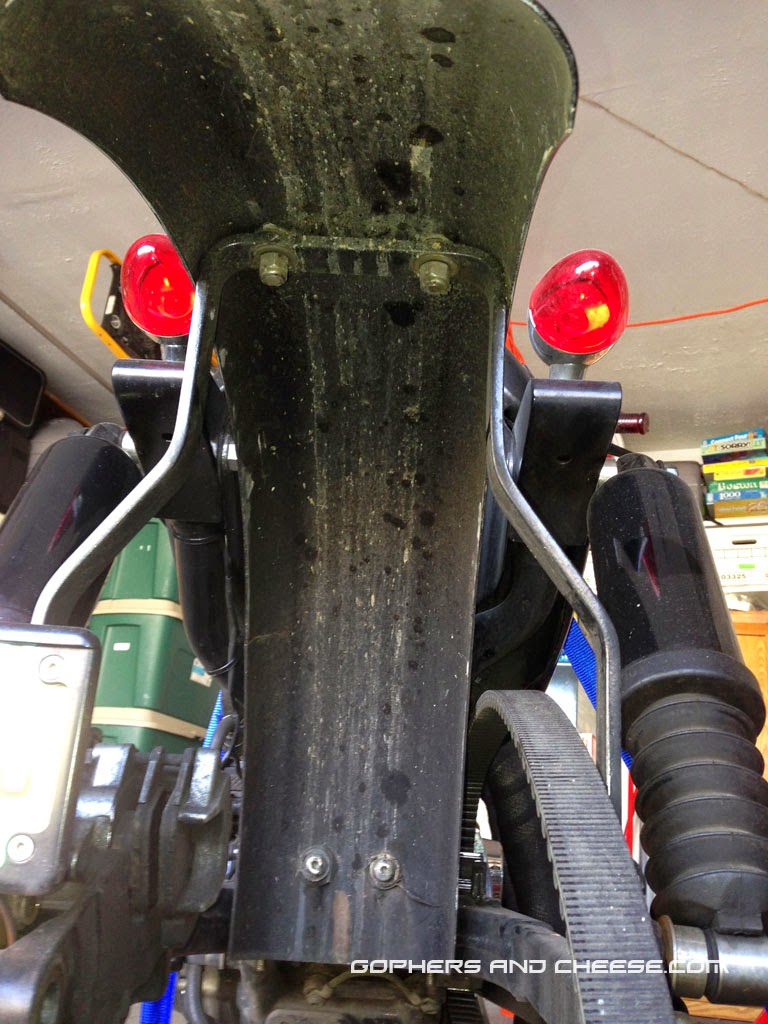 This setup had a number of issues.  The biggest was that the fender was rather flat and wide and a very small section would smack the frame when the shocks bottomed out.  Directly to the left of where the fender would hit the frame, the fender actually cracked.  Part of it may have been due to hitting the frame and some might be due to vibration or flex.  When I mounted the fender to the brackets, I used rubber washers and grommets to cushion the mounting points but the rubber wore out leading to fender movement. 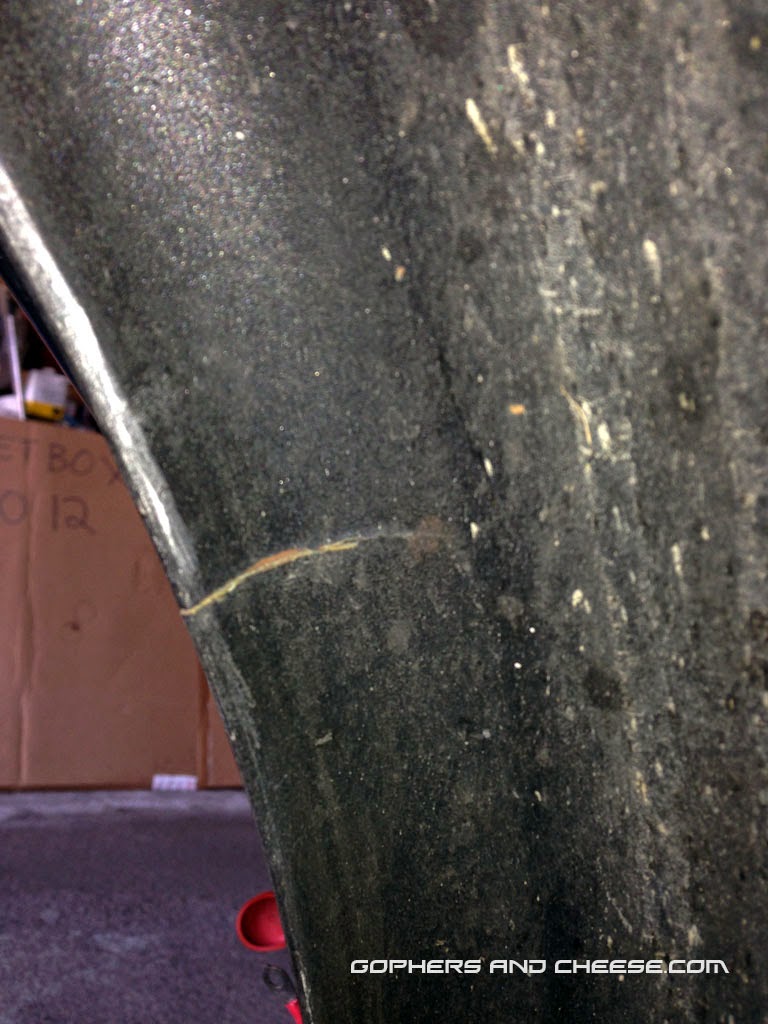 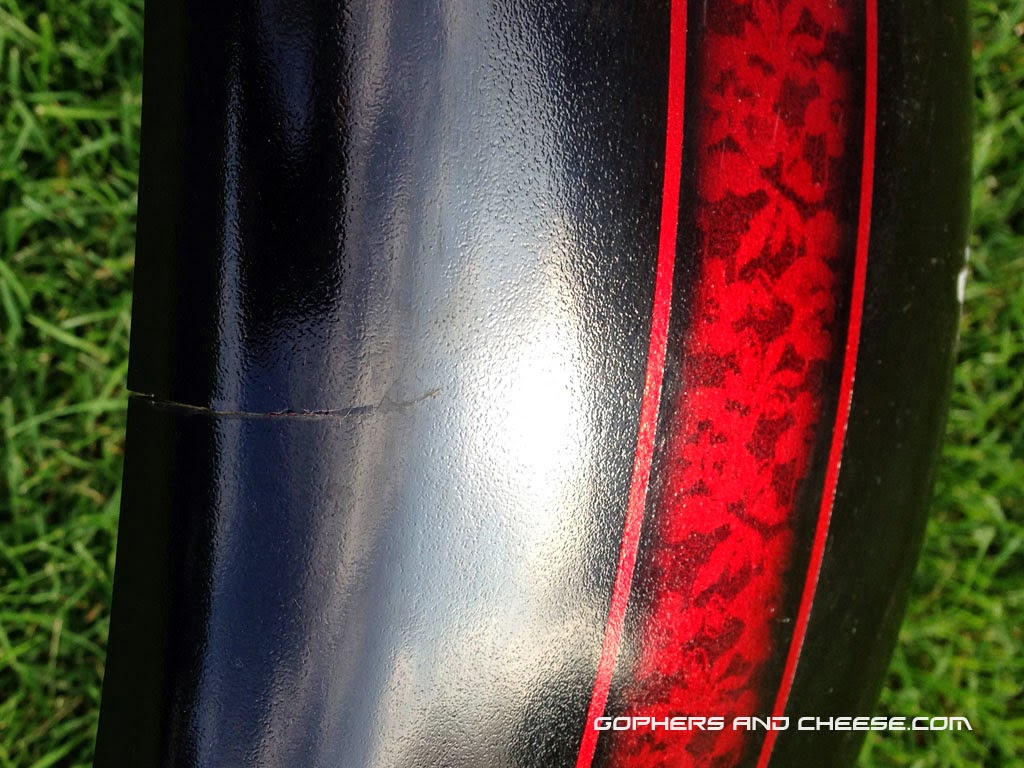 I also had a number of paint issues since I painted my tank and fender with rattlecan paint, which is not as hard and durable as proper automotive paint.  Here's where it chipped from hitting the frame: 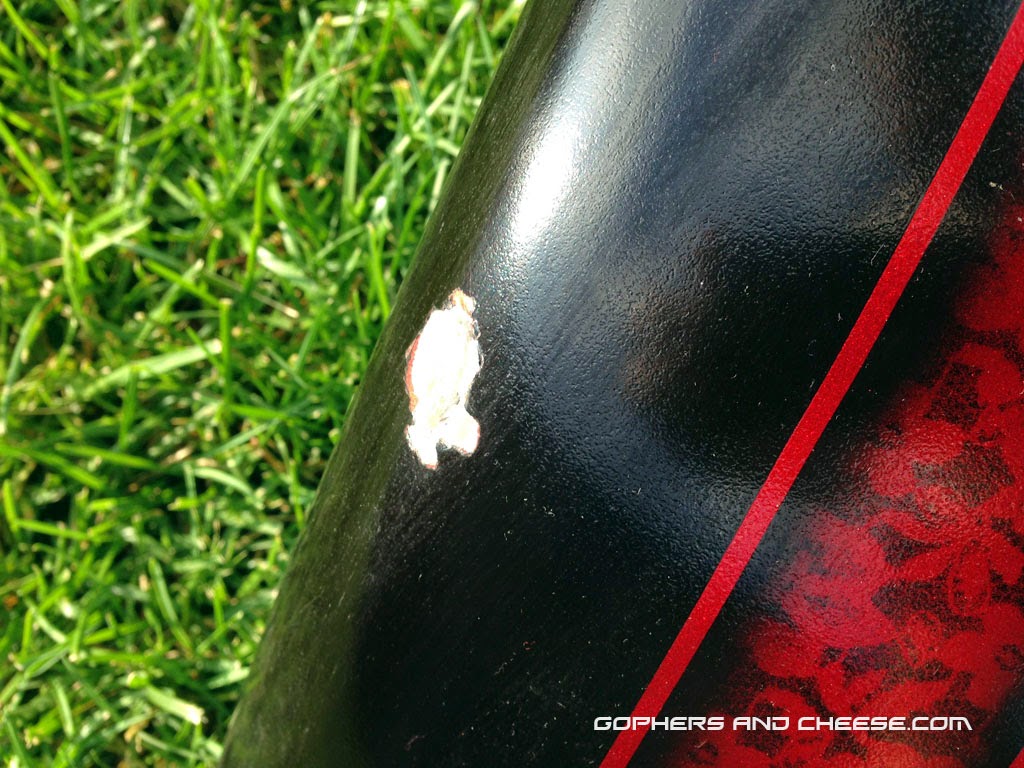 Here's another paint chip on the edge: 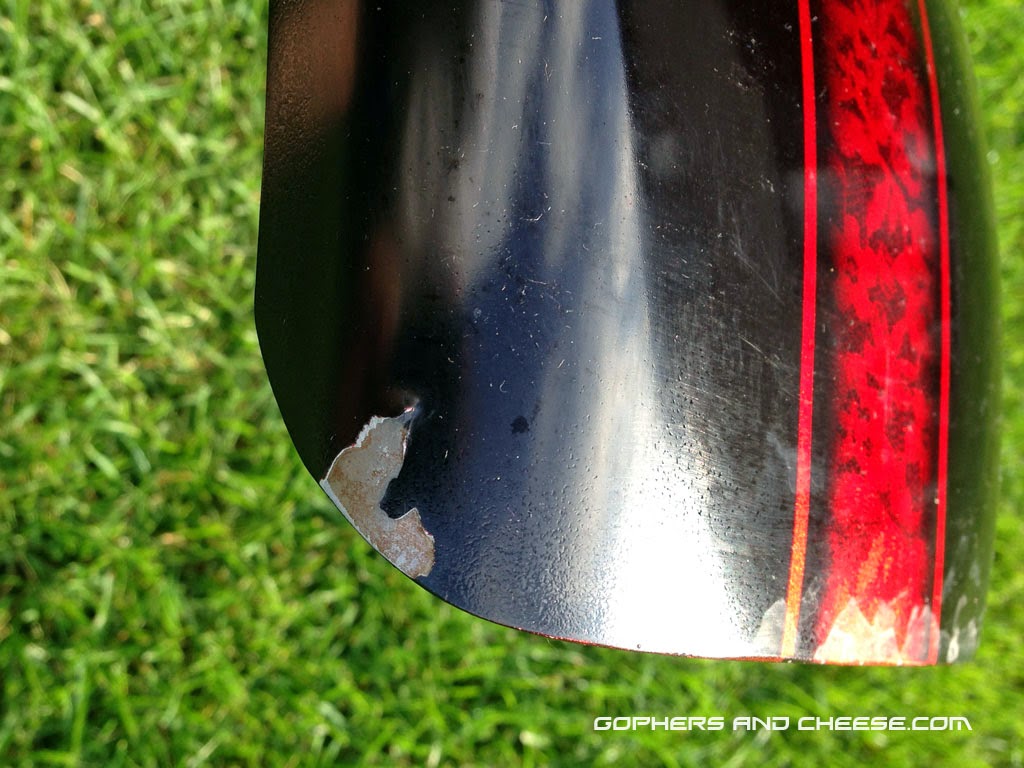 Paint bubbled up near one of the top mounting holes: 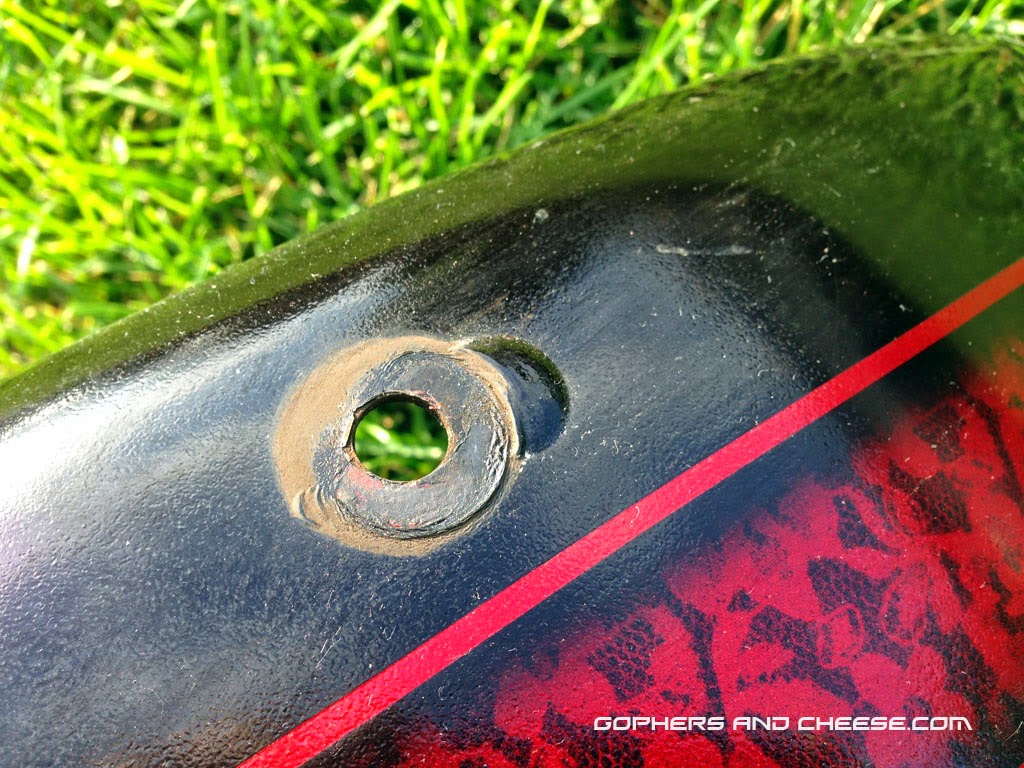 The paint also started to lift and was clearly soft around where the fender mounted to the swingarm but you could never see this section when mounted: 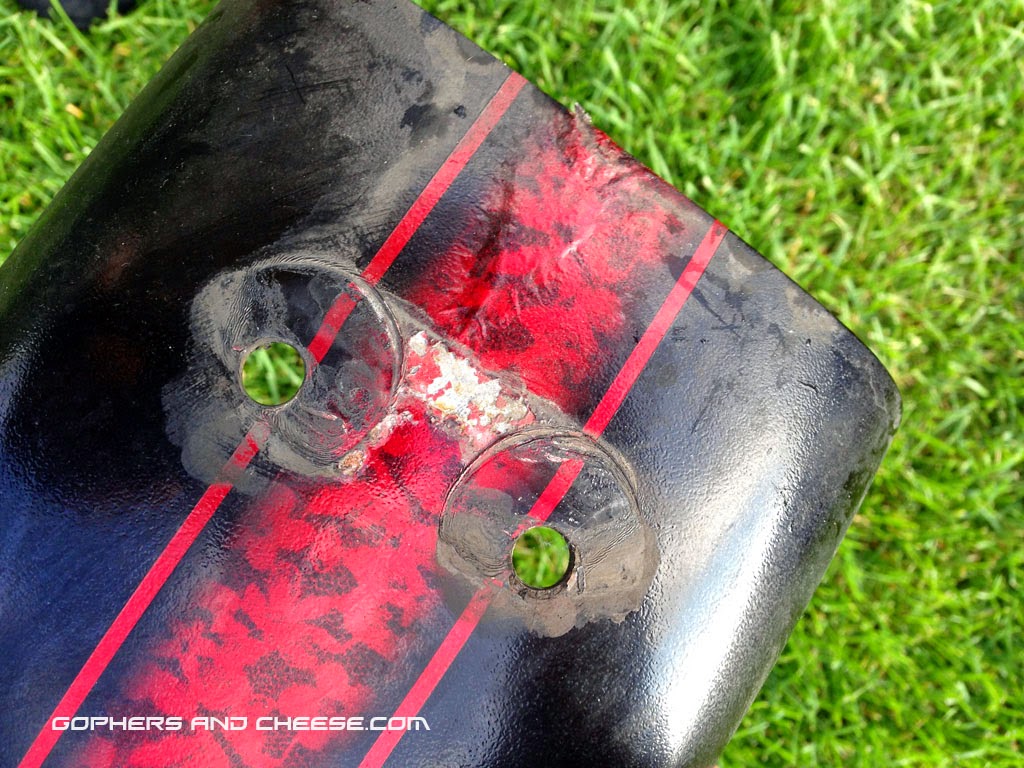 After some research into fender options, I decided to go with the BEAUTIFUL fenders handmade in the USA by Joe Cooper of Cooper Smithing Co.  Seriously, follow him on Instagram (@coopersmithingco) because his metal-shaping craftsmanship is insanely good.  When the box arrived, I was so excited. 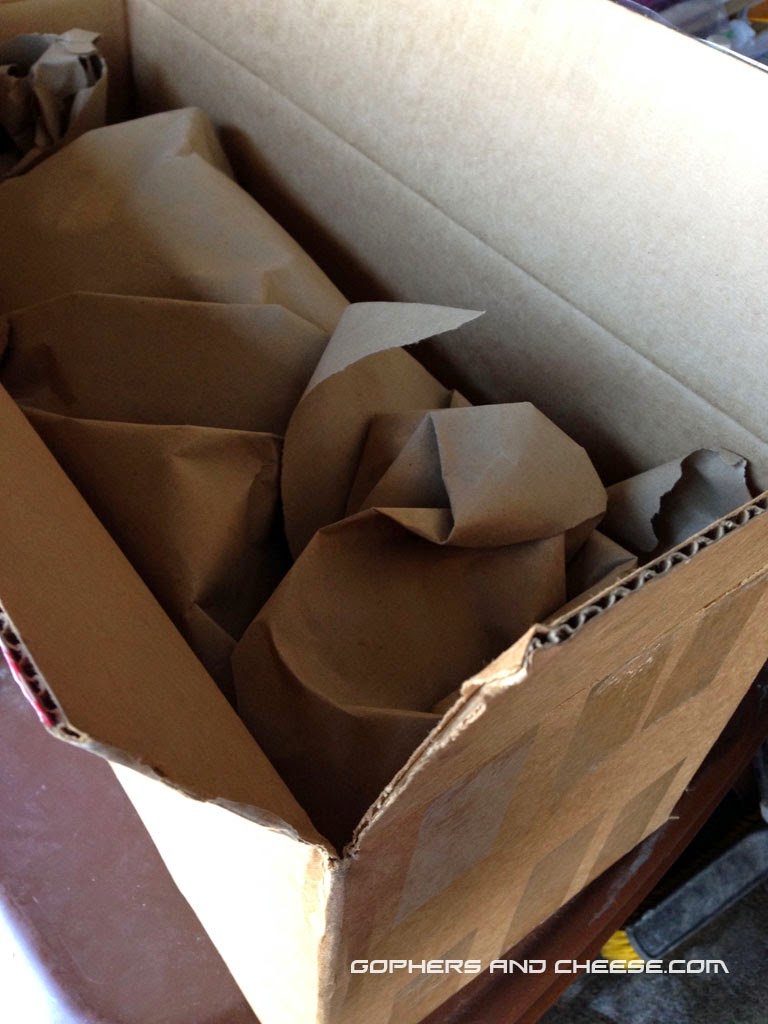 I special-ordered a fender with one round end and one squared end.  Seeing one of Joe's fenders in person exceeded my high expectations.  The thing was beautiful and flawless.  I swear you could paint or chrome the thing with no bodywork needed.  Can you believe this used to be a single flat piece of steel and it wasn't stamped? 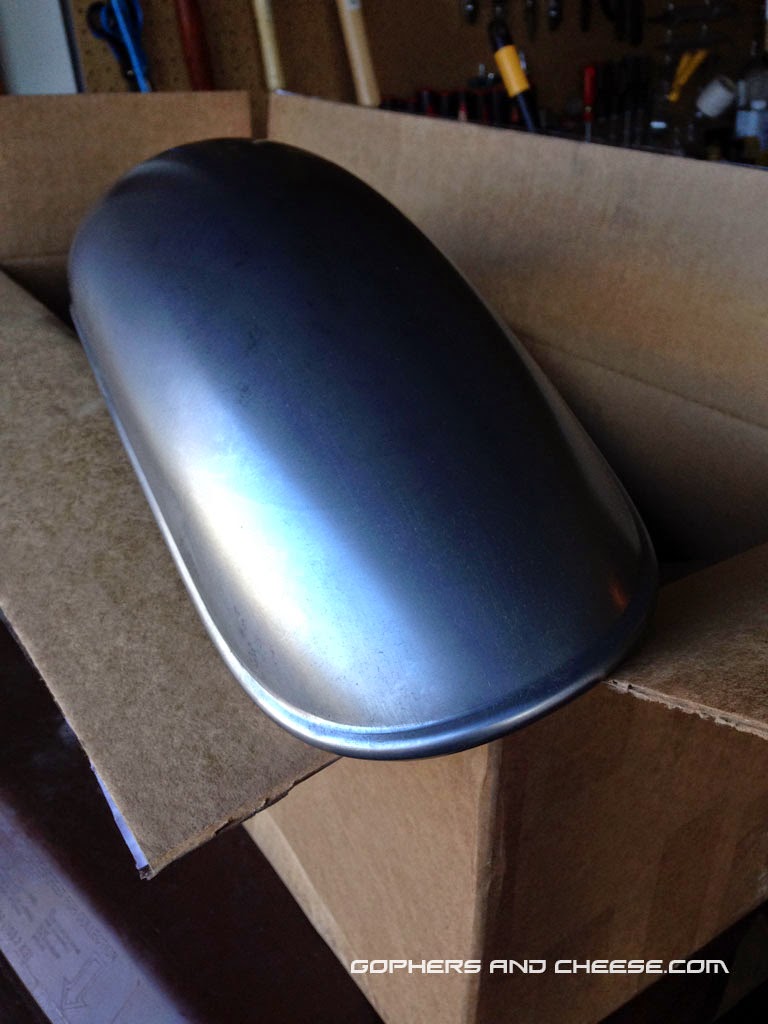 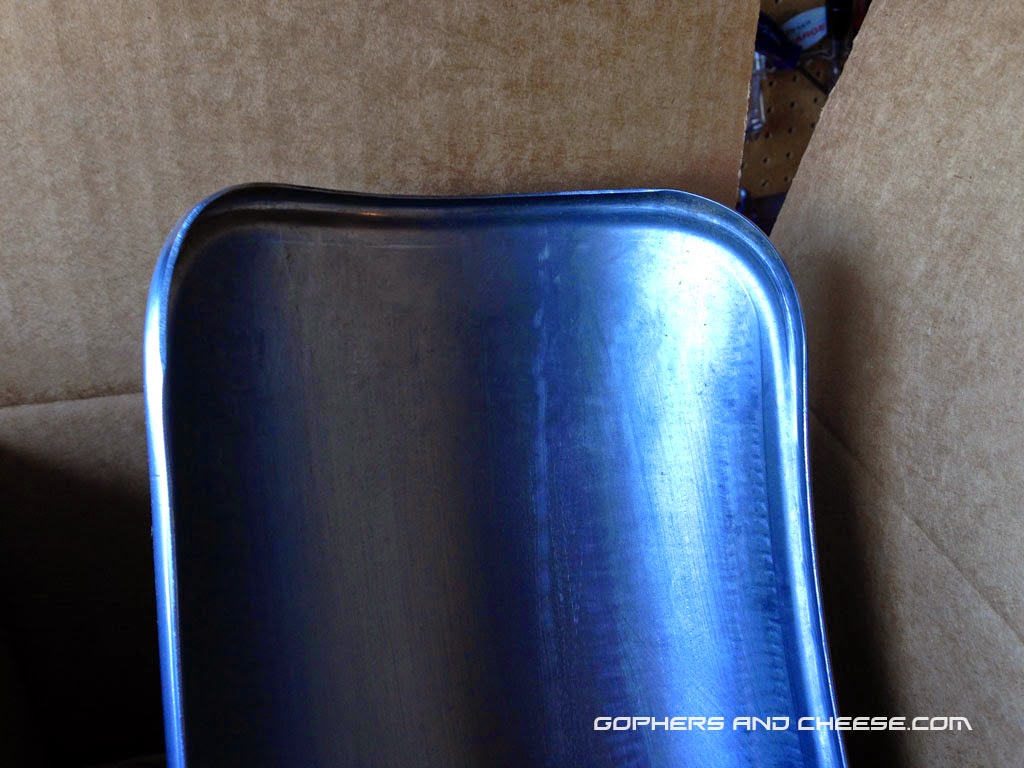 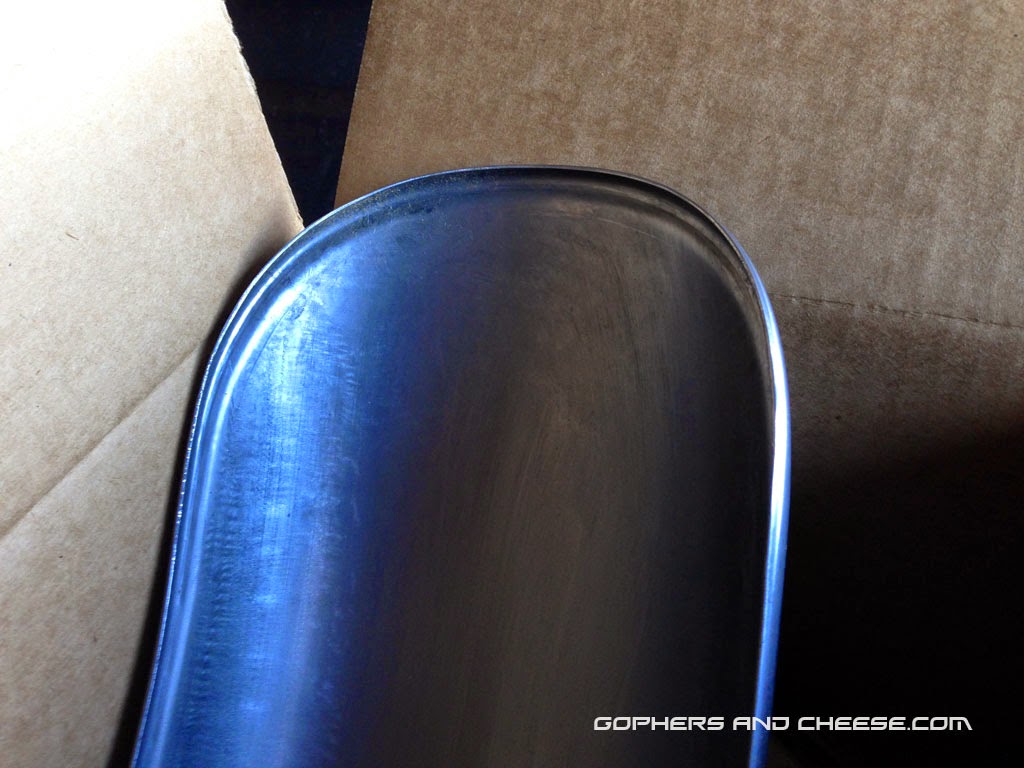 A quick mock-up on the bike using my old bracket to prop it in place confirmed that this was definitely the right fender to go with. 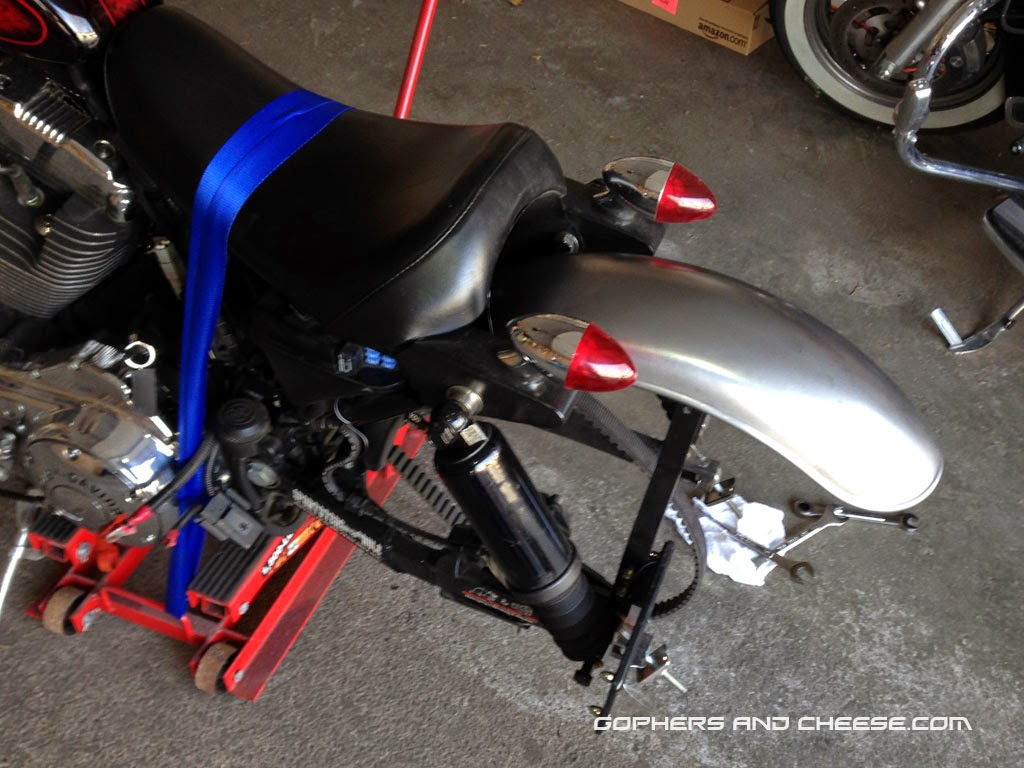 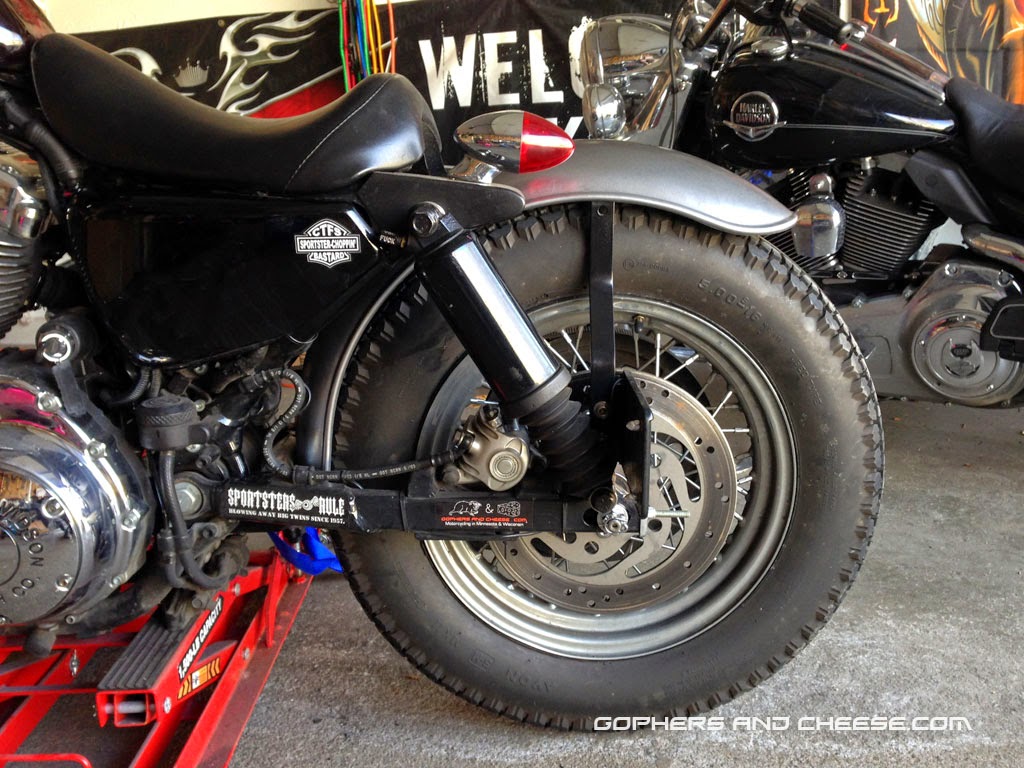 I bought the new fender in April but I didn't get around to making the brackets and painting the fender until May & June (blog posts to come).  For those months, I just ran the bike without a rear fender.  I still needed the bracket since my license plate bolted to it.  I just slapped one of my "Fenders Are For Pussies" stickers on it (available for sale here) and was good to go. 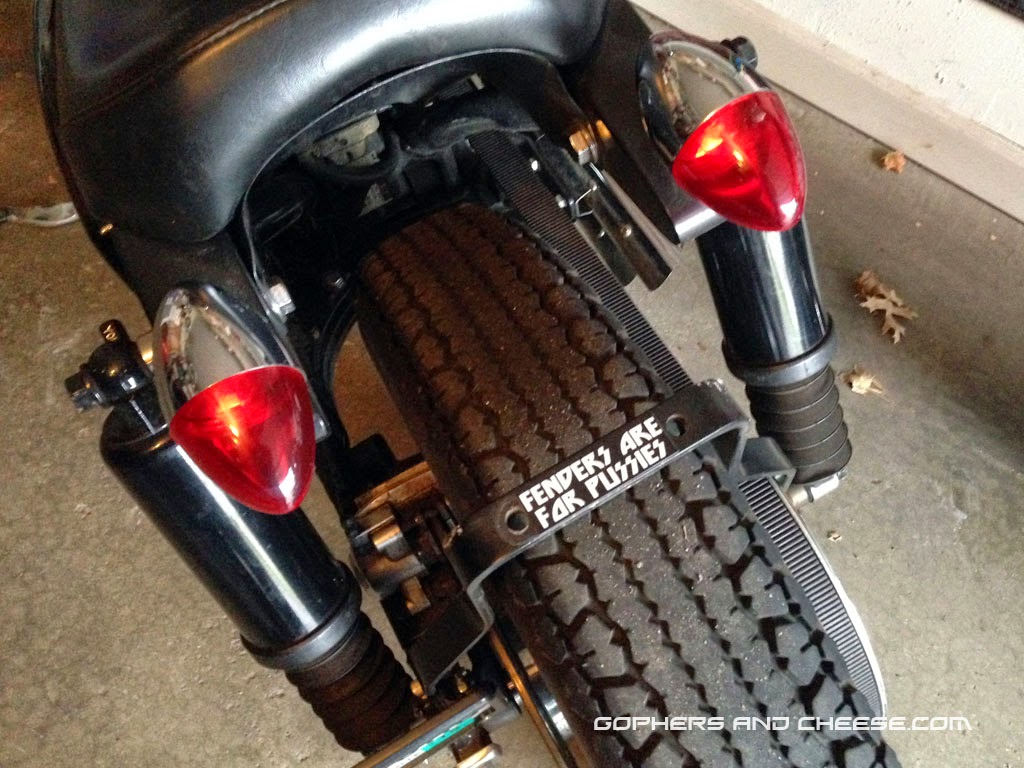 Bracket fabrication is up next.