This past Sunday, I partook in Speckled Egg Sunday Funday... at least for most of the day.  Scott (aka @choppinflour) organized the run and it sounds like it's the 2nd year he's done it.  The rendezvous point was Wyatt's Twisted Americana in Hastings, MN.  I thought I was at the wrong place when I was the first to arrive.  Thankfully, they served both hot and cold beverages so I didn't have a problem waiting. 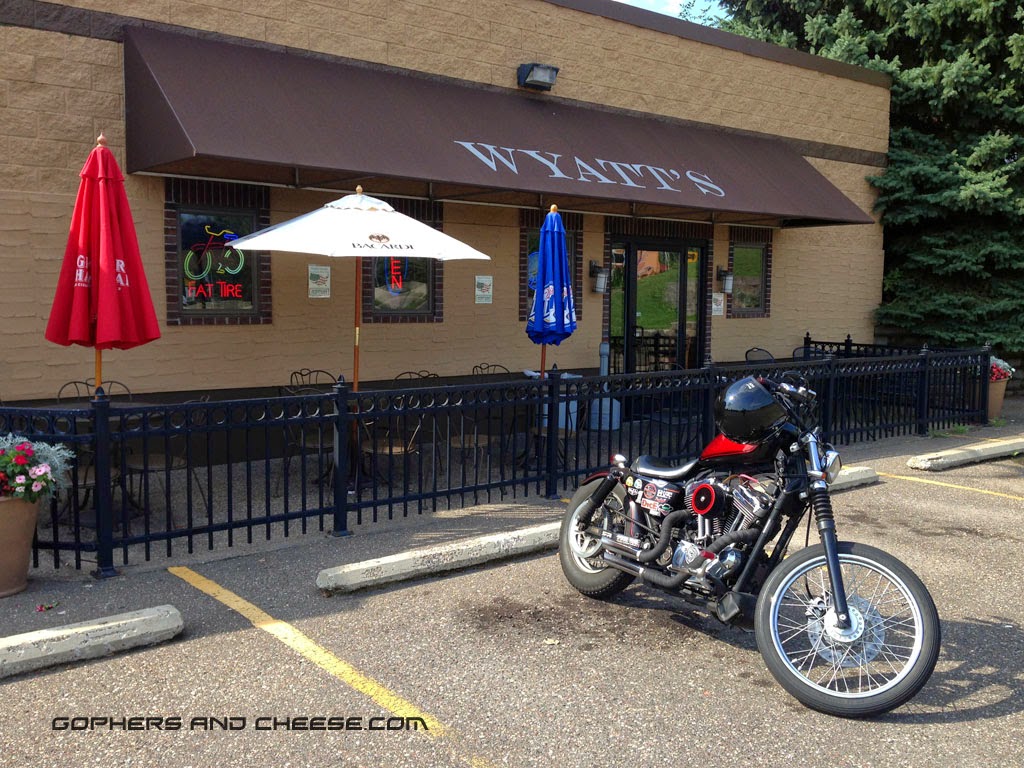 Scott was next to arrive and we ended up with a small group of 10 people on 8 bikes as we headed out.  We hit a bunch of fun, curvy roads first including a few I've never been down before.  We also hit some favorites of mine too including the road between Welch and Vasa.  I didn't take any riding photos this time but @ettelmn8 posted this one on Instagram of about half the group at a stop light.  If you can stop laughing at Reinhart and look closely, that's me in my mirror bubble shield in the back-left. 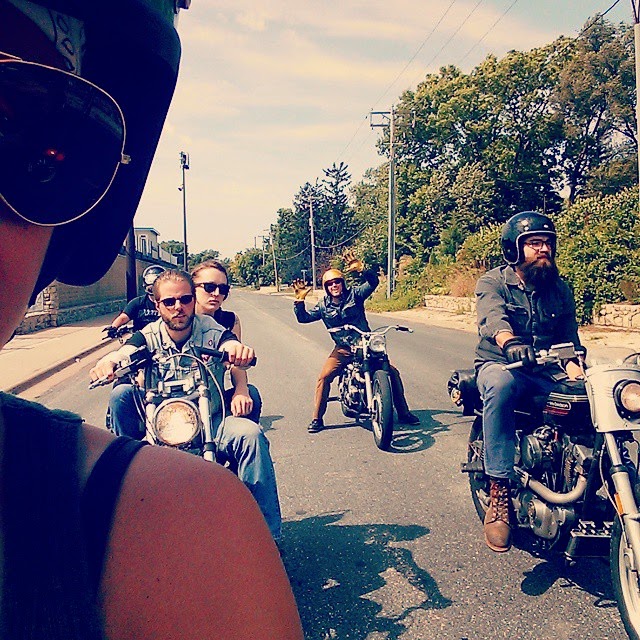 Our first stop was the Harbor Bar in Red Wing, MN.  Somehow, in all the times I have been to Red Wing, I had never been there before.  Note the Triumph leaning against the fence.  Reinhart refuses to put a kickstand on that bike for some reason. 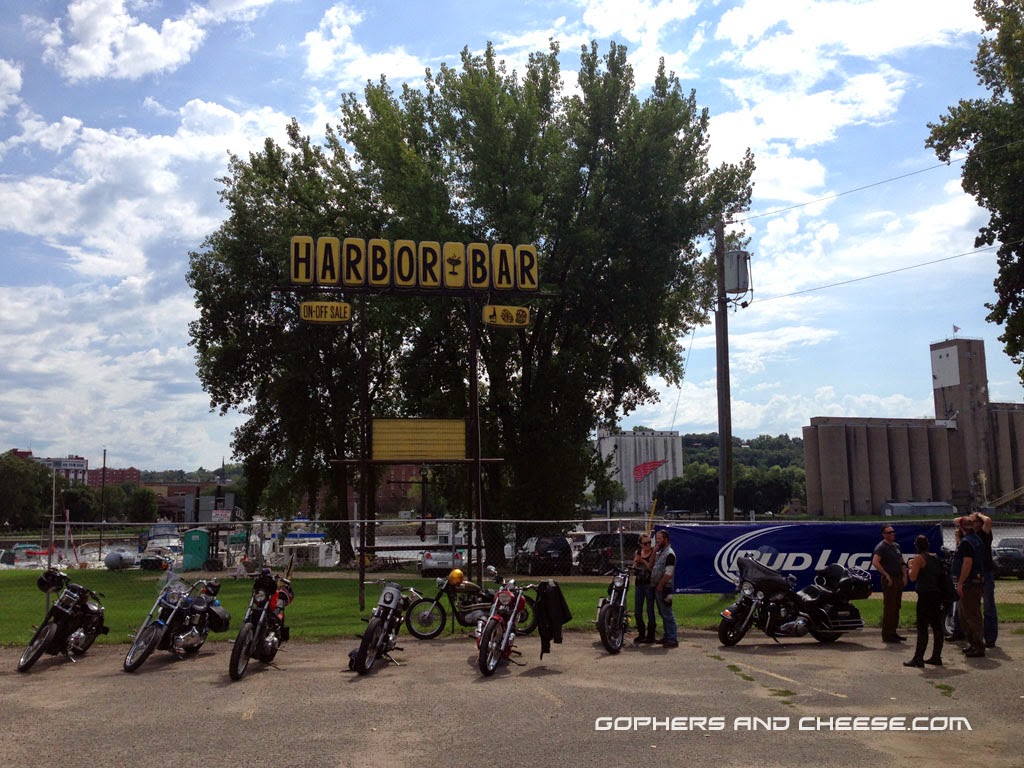 After that we crossed into Wisconsin and stopped at the Nauti Hawg in Diamond Bluff, WI... 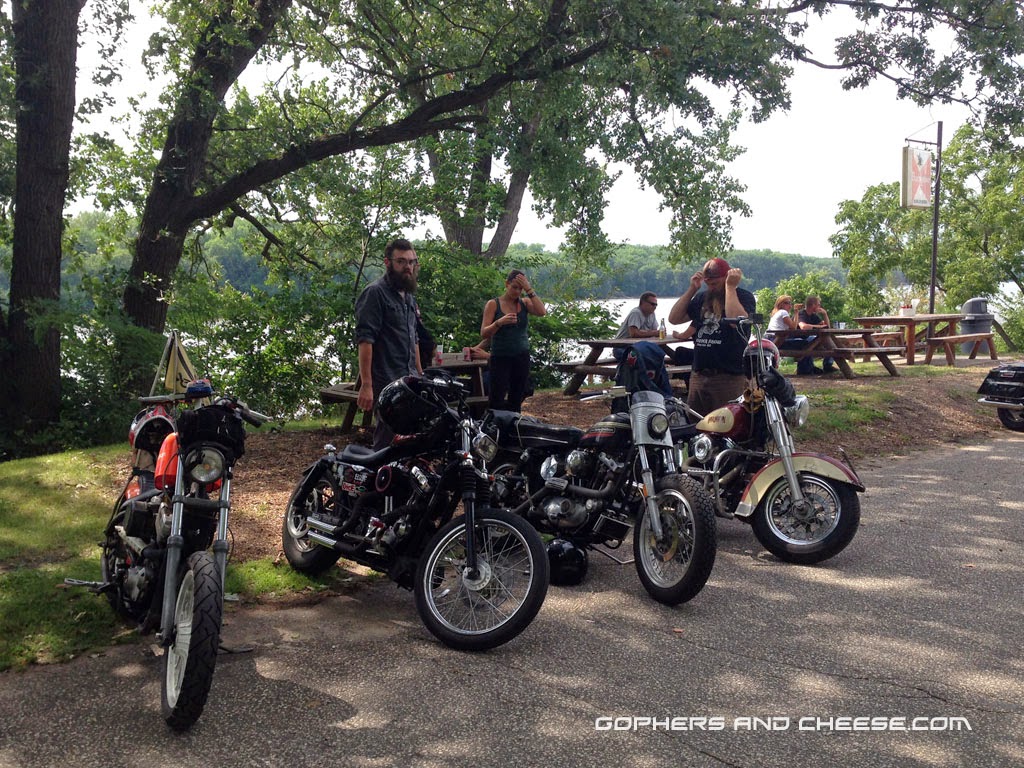 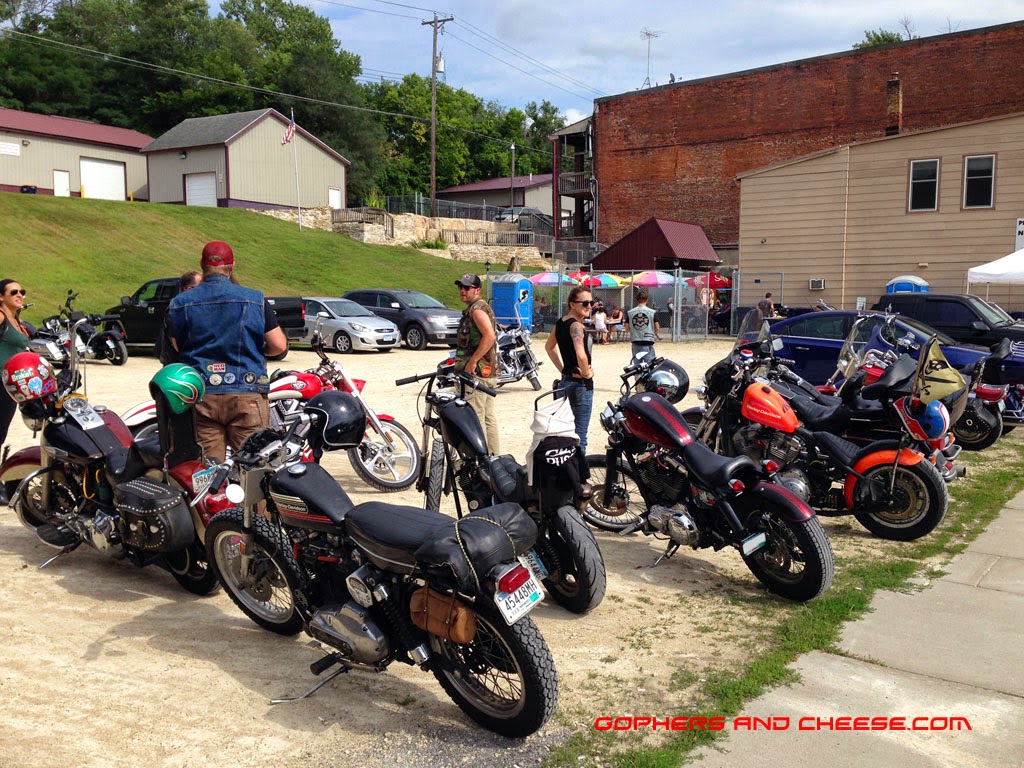 It was in Prescott I noticed that I had been traveling with a sidekick for a while. 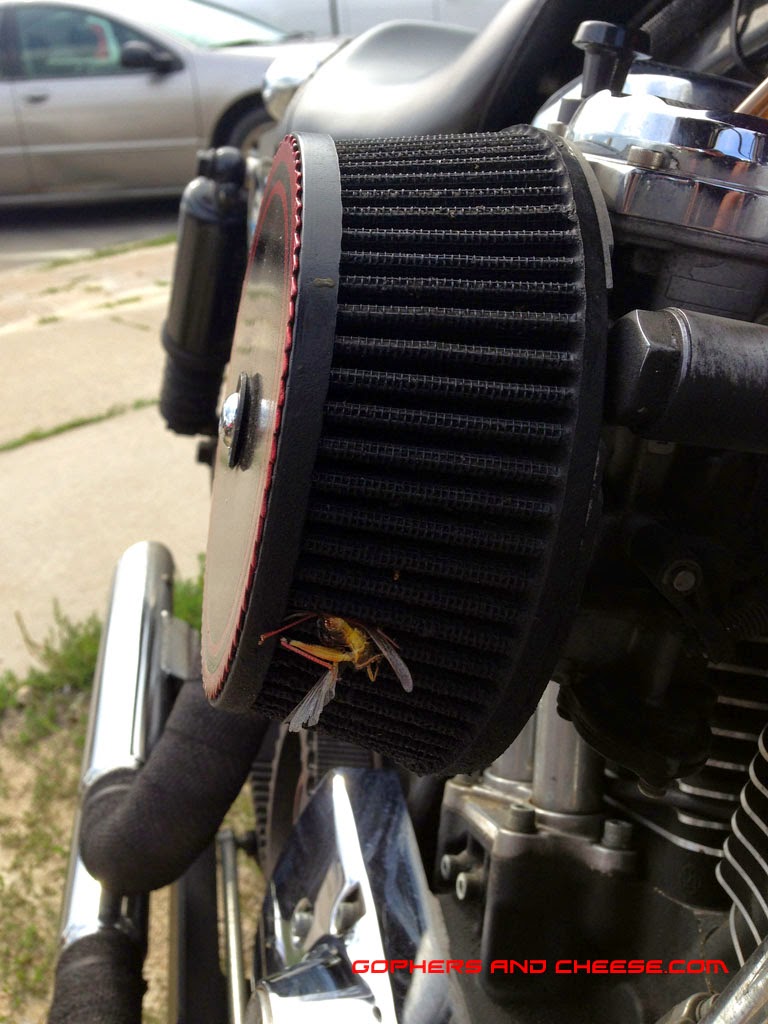 Then it was back to Hastings, MN for a stop at The Busted Nut (no photo) before arriving back at Scott's place (aka "The Commune").  There are chickens and cats everywhere, living in perfect harmony.  Sadly, there were no speckled eggs (false advertising). 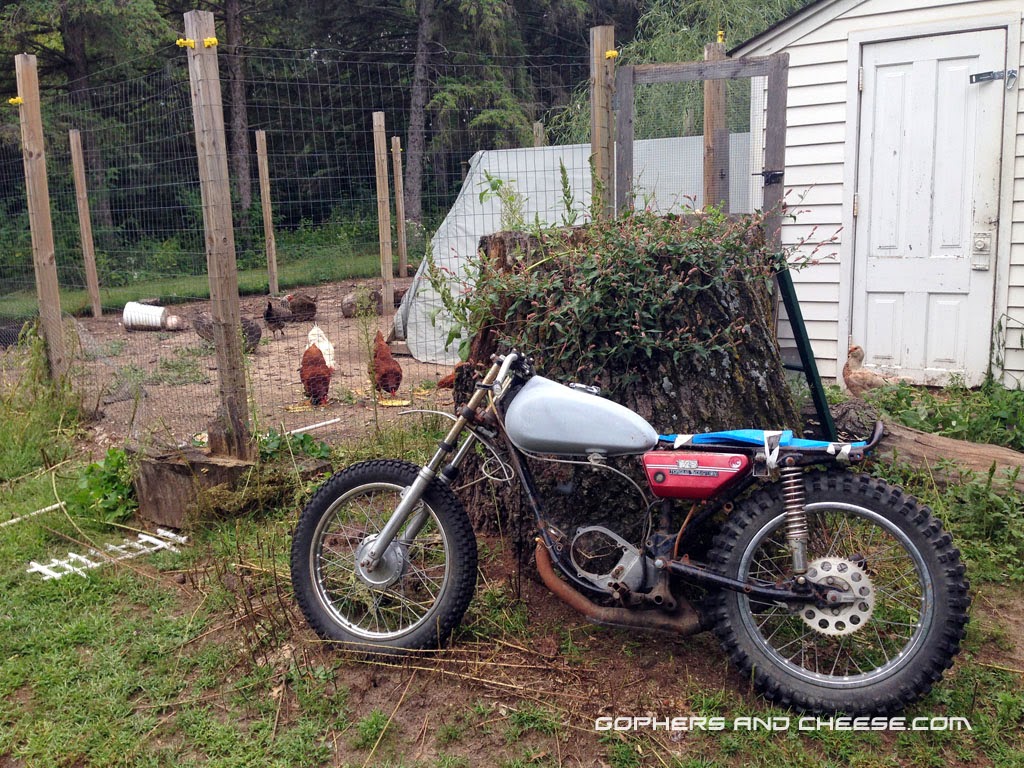 He and his friends have a few bikes in the garage. 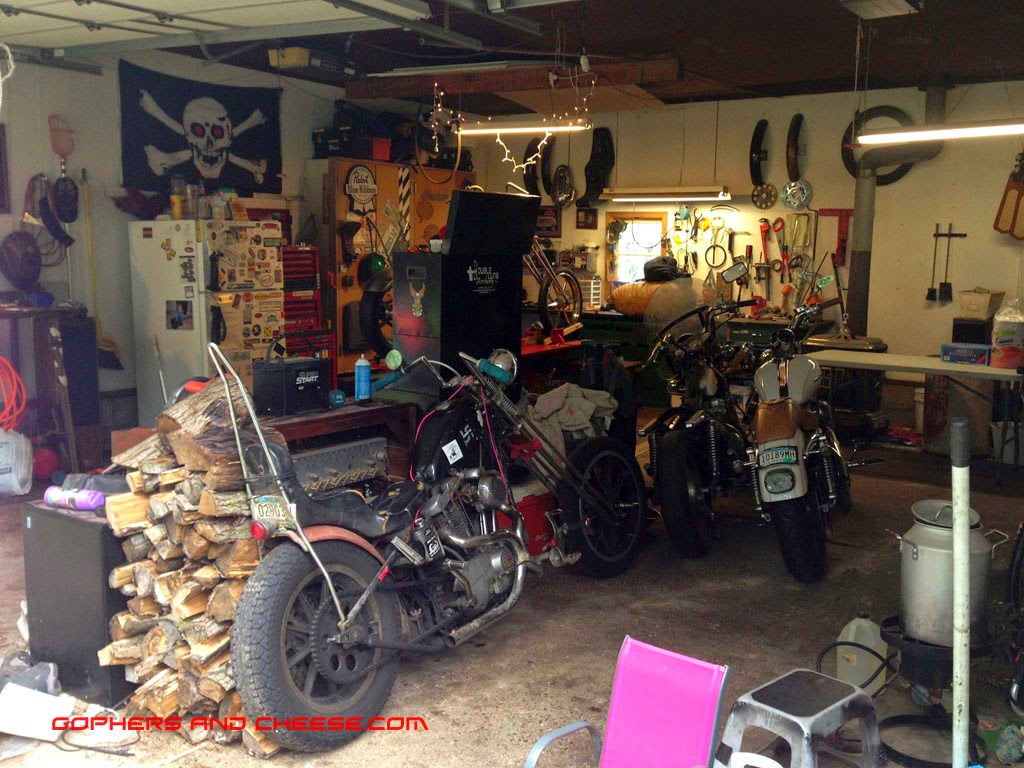 I'm looking forward to seeing this one finished. 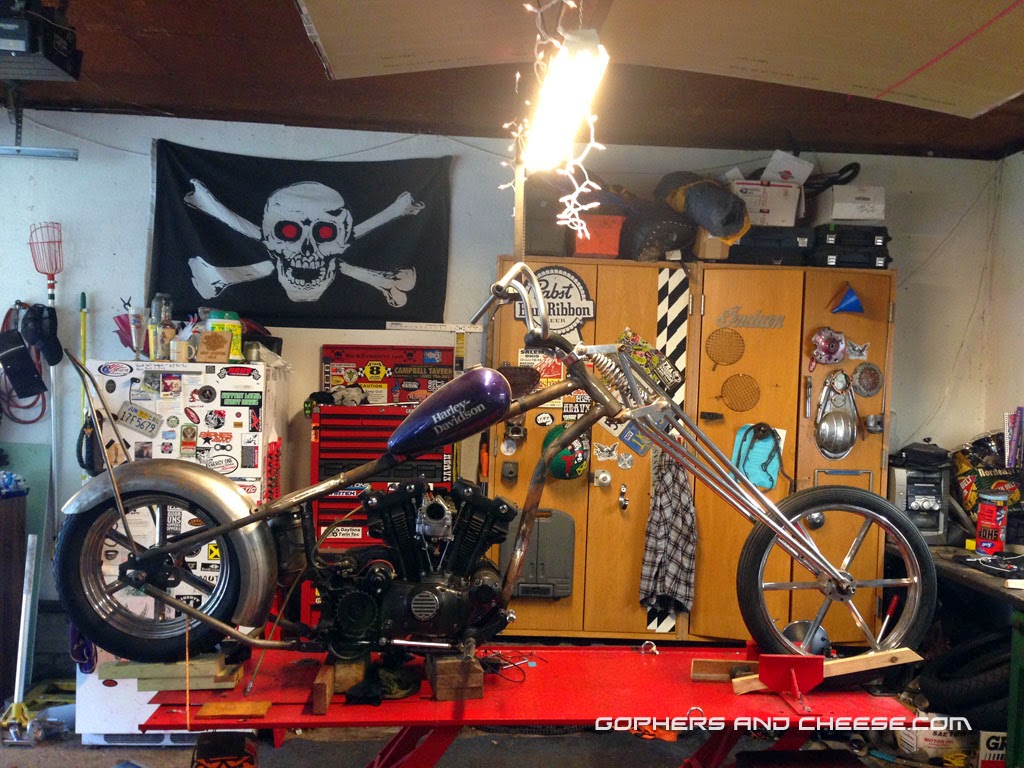 While in the garage, I couldn't help but admire his sticker collection. 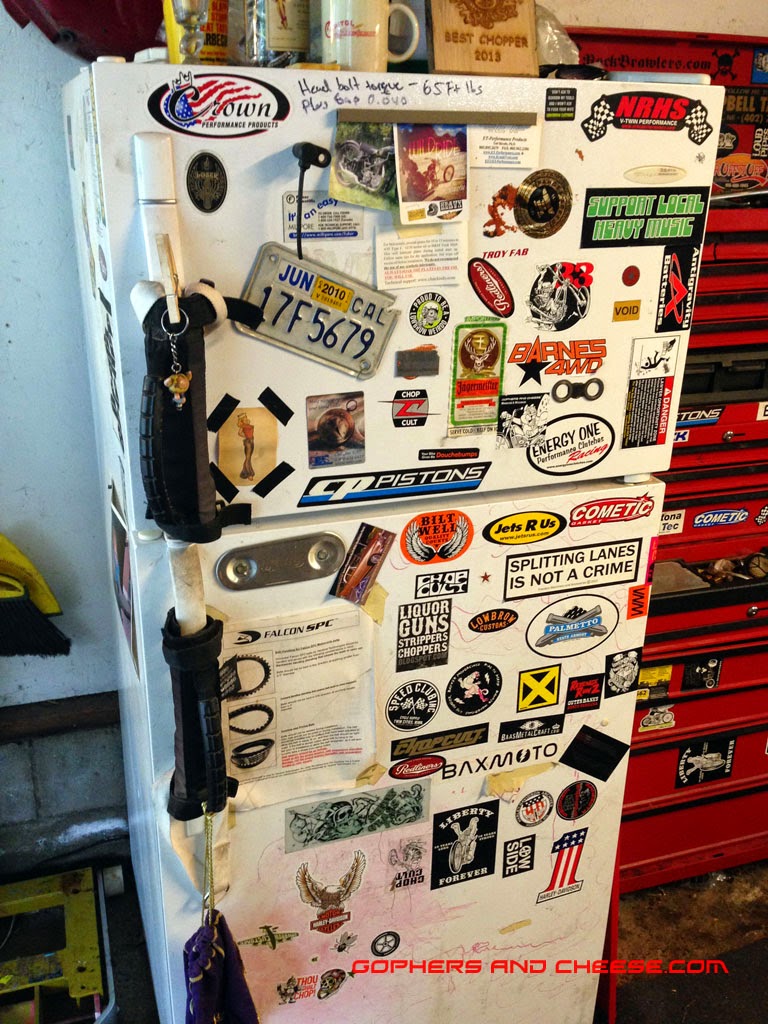 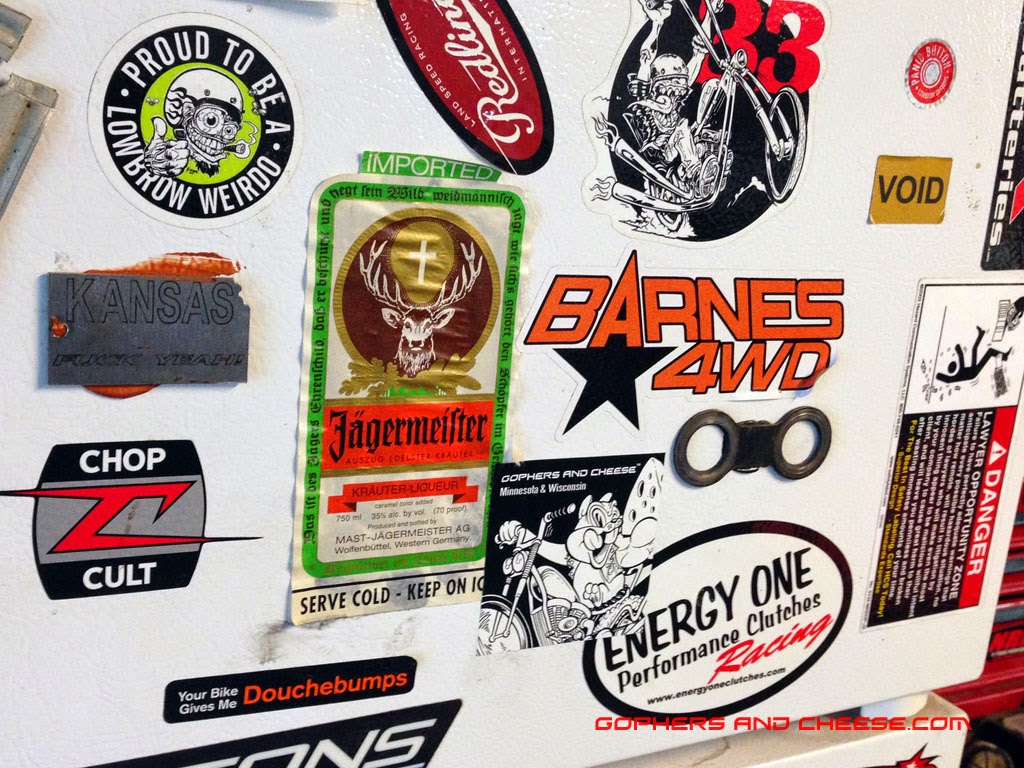 Nate took Charlie's Victory for a spin.  That bike accelerates quite fast. 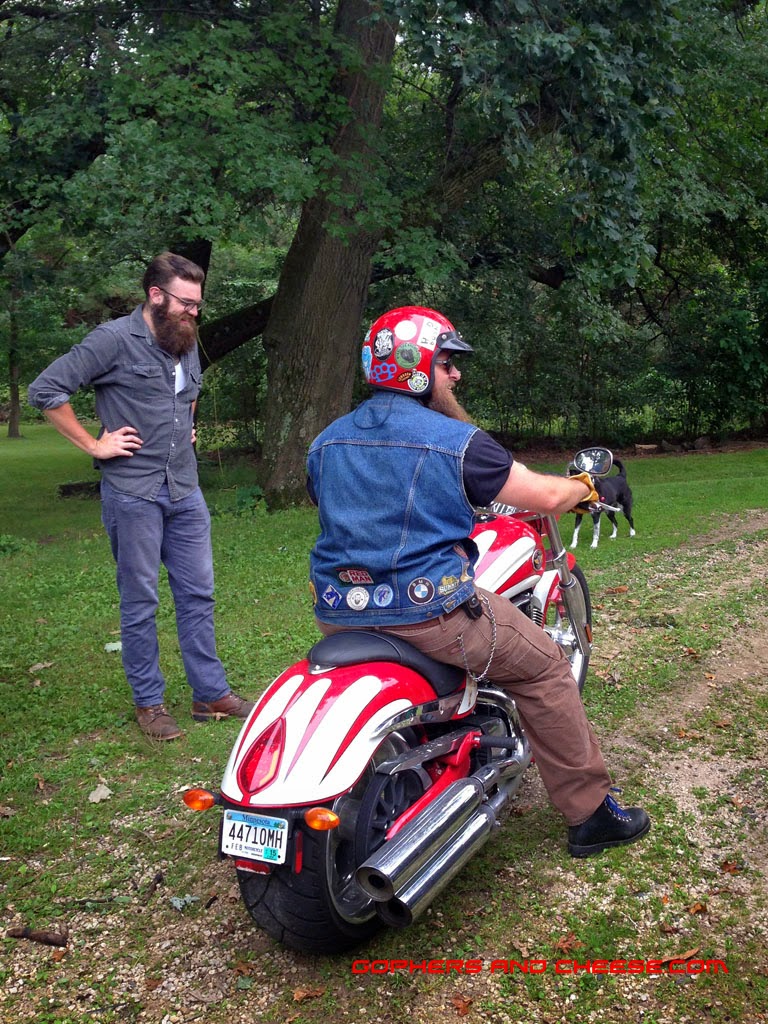 Here's Scott's bike... and a chicken. 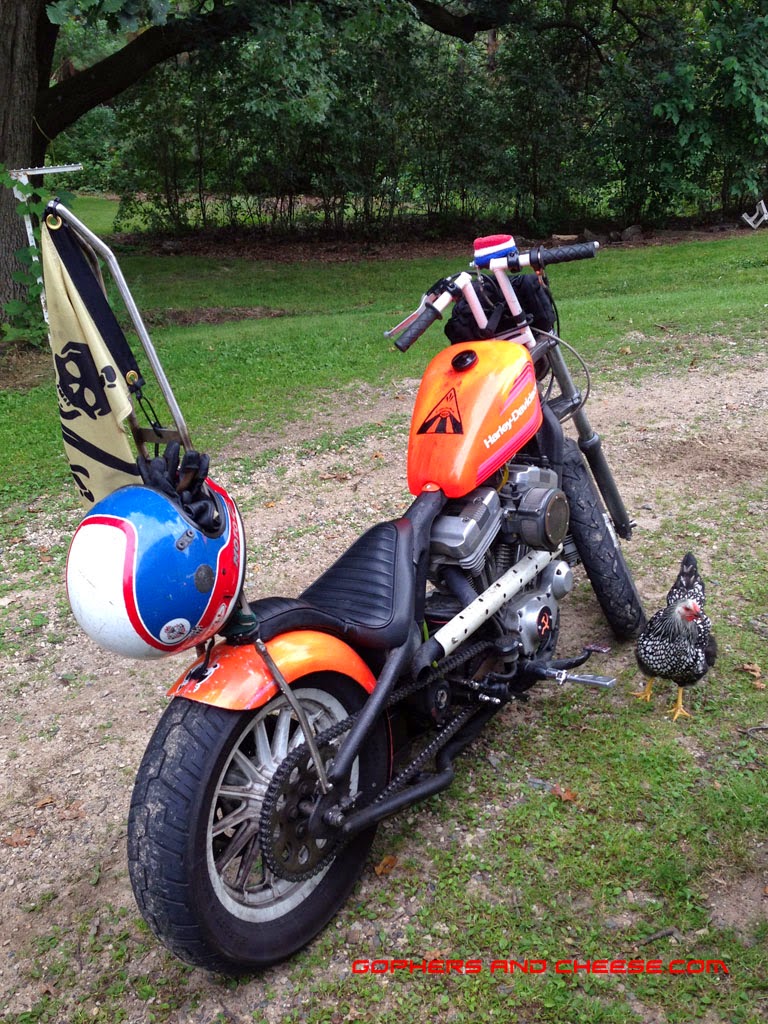 We ended up doing a few rounds of slow races on his lawn and then I decided to leave early as storms were rolling in from both the south and west.  There was a threat of hail and tornadoes so I reluctantly decided it was best not to stay so I could get through the cities before the storms hit.  Those who stayed were treated to a home cooked meal, improvised flat tracking, belt branding, fireworks, minor injuries, a night of camping, and probably lots of other fun stuff including Charlie's amazing feats of napping (they are seriously impressive).  Since there were only about 10 people on this run, odds are that you missed out.  Better luck next year.