Scooter Trash 3 was September 28th at McKracken's Pub in Burnsville, MN.  I missed the first two years and only found out about this year's show about 2 weeks before the event.  It was supposed to start at noon but it rained all morning.  I arrived around 2pm.  The roads were very wet but the rain had mostly stopped.  The rain really hurt the turnout but there were still some great bikes there.  If it was sunny, there's no doubt the show would have been even better.

As you can see I tied on my "fender" and rode my Sportster. 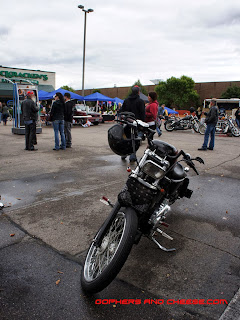 There were a few categories where you could win if you entered your bike.  I believe the awards were all made by Kevin Baas. 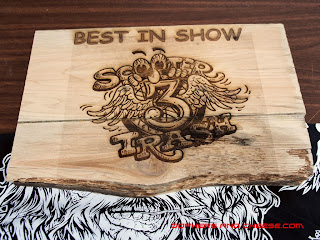 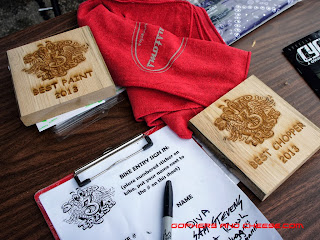 A few vendors were set up including Kevin (more on his bikes later) and Relic Kustoms.  Relic won the "Best Foreign" award for their Triumph.  I've seen it at a few shows now and it's a beautiful bike. 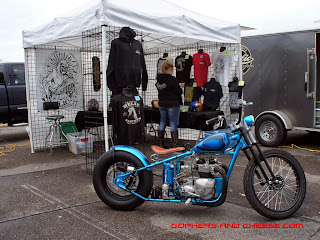 A couple of cars showed up but the show was definitely motorcycle-focused. 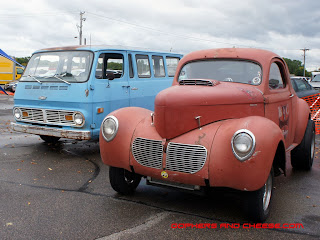 This guy took a lot of crap for his V-Rod.  He had it hooked up to a battery for the sole purpose of revving the engine loudly.  It had a blown rear tire and some people who have seen it before claimed they have never seen it without a blown tire.  I didn't talk to the guy so I can't say, but what I do know is that the last time I personally saw the bike (blog post here) it also had a blown tire and I didn't see the burnout that caused it.  The little kid was cute. 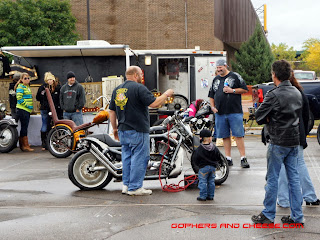 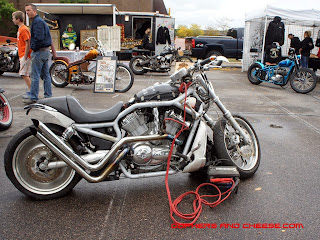 It's gonna take the next 3 posts just to get through the shovelheads, panheads, and knuckleheads so keep coming back.  I have about 100 photos to share from the show.