I woke up just before 6am on Monday 3/11.  I took a shower, packed my things, and loaded up the bike for the last time.  I found yet another good place to eat and had breakfast at US Egg.  The sunrise was beautiful as I pulled into the parking lot. 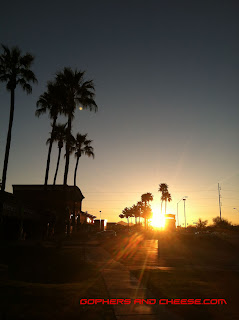 I had the half & half for breakfast, which is half protein pancakes and half potato skillet.  Protein pancakes are a signature item of theirs and contain blueberries, granola, cinnamon, and almonds.  Everything was great. 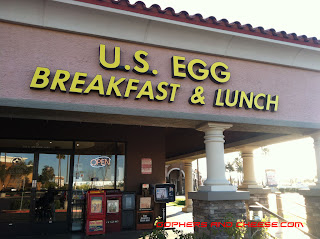 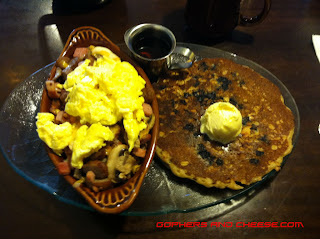 From there, I rode back to Buddy Stubb's Arizona Harley-Davidson and got there just before they opened at 8am.  I unloaded the bike and snapped some photos. 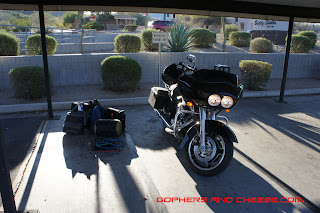 After riding 3 of the 5 days in the rain, the bike was absolutely filthy.  I felt bad for whoever had to clean it.  It probably required an entire tube of chrome polish. 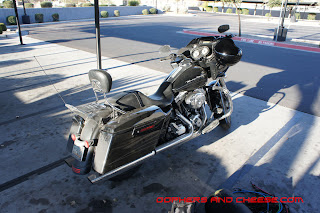 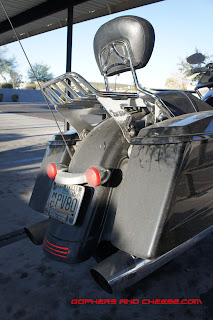 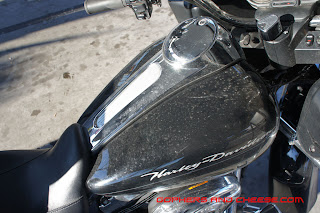 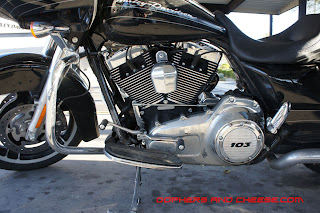 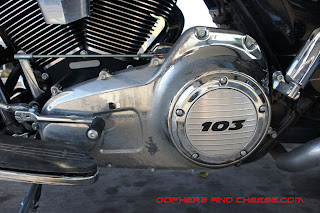 According to the Google maps I've been posting for each day of the trip, I covered a total of 1,433 miles which (according to Google) should have involved about 27 hours of riding (not counting stops).  With some additional running around for meals and whatnot, the odometer's trip meter showed I actually covered 1,534.7 miles. 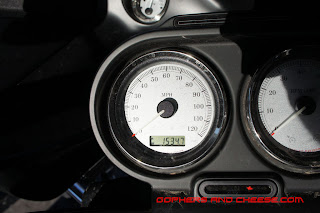 I had arranged for a cab to meet me at the dealer at 8:45 and he was actually a little early.  I cabbed it to the airport and made my flight without any issues.  I even got another window seat and by some sort of miracle the middle seat next to me remained open in spite of a very full flight (I didn't think I looked that scary).  I watched out the window as the dry desert landscape turned into snow-capped mountains and then finally into the flat, snow-covered midwest. 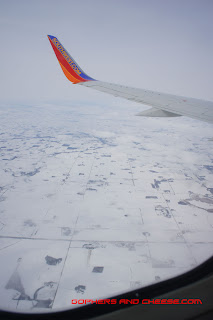 Because Arizona doesn't "celebrate" daylight savings time and the fact I crossed time zones, I lost 2 hours on the 3 1/2 hour flight back so I landed 5 1/2 hours after I took off.  I took the light rail into the city and met up with my wife as she was leaving work for a ride home.

The trip was awesome and I really appreciate my wife watching my daughter solo the whole time while I was off riding around in the desert.  The trip was a lot colder and wetter than I had anticipated but the weather was still better than it has been in Minnesota lately.  I was very well-prepared with clothing and gear so I stayed relatively warm and dry the whole time.  While I wish I could have seen the Grand Canyon and camped longer, I made the most of the time I had and saw a lot of things I otherwise wouldn't have.  Besides, it gives me a great reason to return one day.

Here's the trip in numbers:
If you've ever thought about riding in the southwest, GO!  It's beautiful.  However, plan your trip for maybe April-May or October-November when it's supposed to be warmer and drier but not ridiculously hot.

Looked to be an amazing ride! Thank you for being so descriptive in your writing. The pics make the blog amazing though! Makes me want to ride the southwest any day now!

Thanks for your comments. I wasn't sure what to expect in Arizona, having never been there, but the scenery was fantastic. If you go, just keep your tank full as it can be quite a long ride between towns with gas.

Great post! Joshua Tree is a family favorite! I too had an exploding tumbleweed experience on my bike in Bowie, AZ; scared the tar outta me!