One day I'll make my own exhaust.  That day is still a little ways out in the future, but it will come.

When I removed the pipes to access the swingarm, I realized my front muffler was a lot more banged up than I previously thought.  Both the front and rear suffered some road rash when I dropped the bike on icy snow in November 2010 (see blog post here).  That's also how I ripped my exhaust wrap.  What I didn't know is the front muffler had deeper scratches than I thought and was slightly dented too.  I had been considering getting a new pair of slip-ons and decided to spring a little more for a full set of pipes.  I love the sound, look, and performance of the Python3 slip-ons and have been running them since April 2007, but I wanted a change.  I hope I like what I bought just as much, if not more. 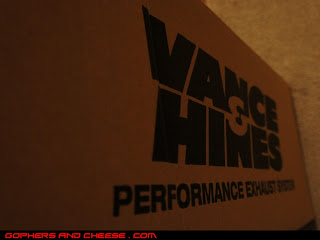