Just when I thought the Sporty was good to go for 2012, my two-year old homemade sissy bar snapped on the left side on Thursday.  It happened right where it bends.  I made the sissy bar out of 3/8" steel rod and it vibrated a lot so it was only a matter of time.  I'm actually impressed it lasted 2 years. 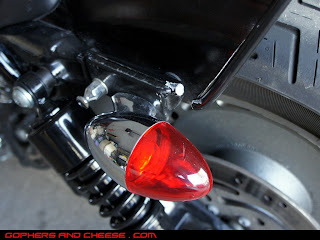 I rode to work that day because I was heading straight to First Thursday at Dulono's that evening and noticed it when I got there.  I rigged it by bending some picture hanging hardware I bought to act as splints, wrapped them in some wire, and wrapped it all in black duct tape.  It wasn't pretty but it held for the day and I didn't miss First Thursday. 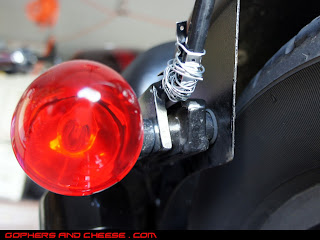 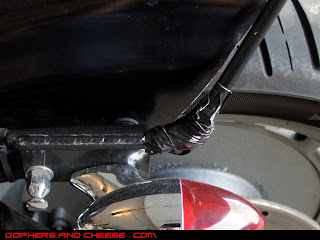 The question now is what to do.  I'm not going to repair the sissy bar because, after two years, the right side is liable to break too. I can't run without it since it holds my license plate and brake/turn signals.  I'm not really happy with the 11" shocks I just bought (very rough ride) but I don't like how high the fender sits above the tire with the old Road King shocks.

Prior to the sissy bar snapping, I just ordered a brand new 40-spoke rear wheel and a fresh set of Avon tires so I will need to ensure whatever I do works with the new rear wheel & tire setup.

Here's the bike with the sissy bar, rear fender, and brake/turn signals all removed and the Road King shocks reinstalled.  No, I'm not going to leave it this way even though it does look badass. 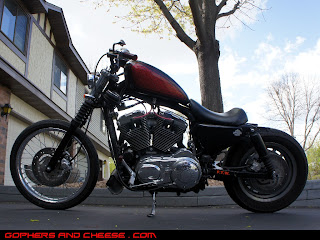 It looks like I'll be very busy in the garage over the next few weeks.