My new fender will get chopped and attached to the swingarm soon.  The question is how.  At this point, I am pretty sure I won't be making a sissy bar and will just make a pair of struts instead.

I made my previous sissybar from 3/8" steel and whatever I do this time will be made from 1/2" cold rolled steel for added durability.  I wasn't sure whether I could bend 1/2" steel with a MAPP torch so I heated a section for a few minutes while it was held in a vise.  I could get it to faintly glow orange and then quickly clamp it in the vise just below the orange spot and bend it with some leverage. 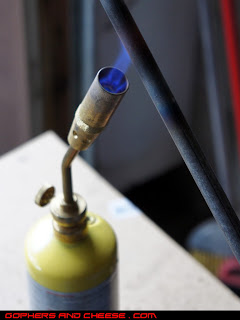 With just a torch and vise, I was able to get the style of bends I was after but soon realized my new rear wheel wasn't centered properly and will have to fix that and bend some fresh struts later.  The plan is they will extend vertically from the lower shock bolt, angle in above the pulley or rotor, extend vertical again, and then made a 90 degree cut over to be mounted to the top of the fender. 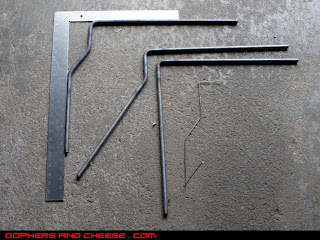 When all that gets sorted, I will cut and attach the struts to fender using 3/8" bungs I bought from Lowbrow Customs. I bought 2 styles and will figure out which one I am going to go with later.  I like the look of the first one better but the second would allow me to get the fender closer to the tire.  Decisions, decisions... 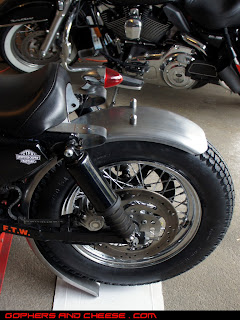 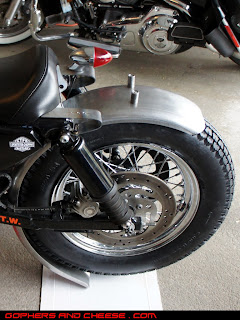