My shipment from Lowbrow Customs arrived Monday.  I've bought a bunch of stuff from these guys before and have never been disappointed.

Even Lowbrow's boxes are cool: 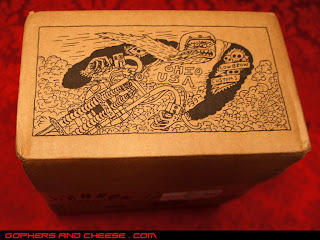 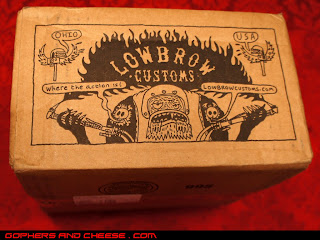 As if the box wasn't good enough, things only got better after opening it.  Among other things, I ordered a set of Biltwell Sanderson Foot Pegs and some red fuel line. 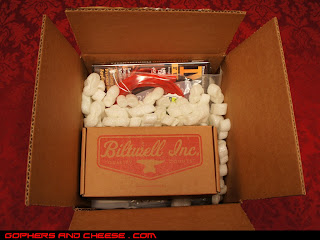 Here are the Biltwell pegs.  I thought about black, but opted for the polished stainless ones instead. 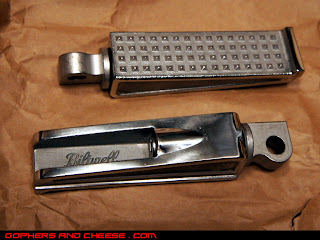 Here are the Kuryakyn Zombie pegs they will be replacing.  Yes they have skulls on them but, in my opinion, skulls are cool in moderation.  I like the Kuryakyn pegs a lot but I'm trying to go in a little different direction style-wise.  The Biltwell pegs are a lot smaller and are obviously not cushioned so I'll be interested to see what the impact on comfort is. 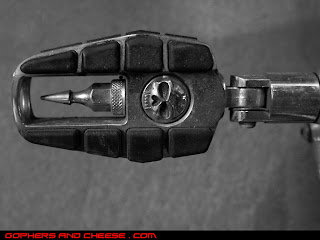 It's funny, I spent a lot of time modifying my brake pedal to accept a shift peg (for various reasons, I've done the mod three times now) but the new pegs I got might actually look better with the stock "meat tenderizer" pedal. I'm not sure whether I'll change the shift and brake pedals yet. 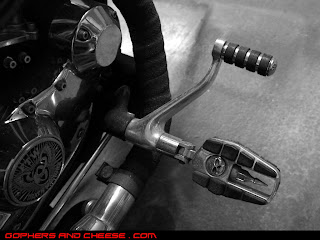 I'll post pics after I get around to installing them.