Last month, I spent a long weekend with my brother in Portland, OR. It was my first time in Oregon and we had amazing weather - it never rained! We had great beer and food. 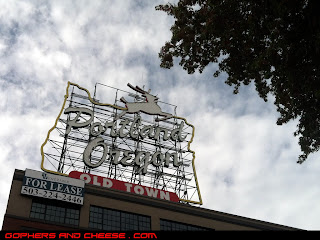 Having just bought a Subaru Outback, I was used to seeing one or two on the road in Minneapolis but in Portland Subaru must be the state car of Oregon as every other car on the road is a Subaru, most of them Outbacks. The other thing that stood out to me was the lack of motorcycles. There were a few but not a lot.  Maybe it just rains too much or perhaps the issue is that Harleys aren't vegan.

I snapped these photos of artwork outside Ptown Scooters. 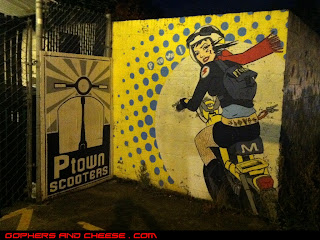 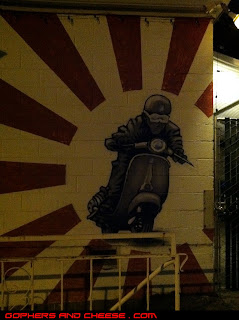 One thing I will say for Portland - they know doughnuts.  Voodoo Doughnut is AMAZING!  I had the Portland Cream, Rocky Road, and Bacon Maple.  Had to wait in line about half-an-hour but it was totally worth it. 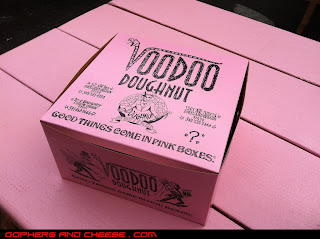 My brother and I did one small road-trip while I was there.  We saw Multnomah Falls and then did the loop around Mt. Hood, stopping at Timberline Lodge (the exterior was used for the hotel in the movie in The Shining).  The trip was by car but it would have been way better by motorcycle.  In fact, I was shocked not to see many motorcycles at all as the roads and views were absolutely beautiful. 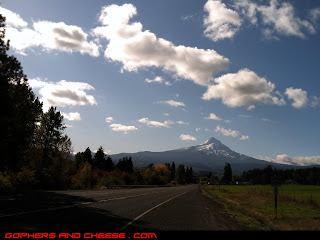 If you get the chance, be sure to check out Portland. It's a cool town. Bring your Harley but don't wear leather and be sure to slap some Subaru stickers over your bike's tank emblems so you'll blend in.

Email ThisBlogThis!Share to TwitterShare to FacebookShare to Pinterest
Labels: Oregon