The 2011 St. Croix Valley Riders (SCVR) Chili Feed was a lot of fun.  This was my second time attending the Chili Feed with the first being 2009.  The weather was absolutely perfect so I was able to pack light and took the Sporty.

Here is my set up.  I got a great spot in the shade along the river. 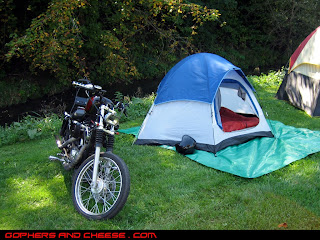 I stacked two bags on the rear fender and carried my tent, tarp, air mattress & pump, sleeping bag, travel pillow, some extra clothes including a hoodie, and a handful of other things.  I had more than I needed but I was comfortable.  I am sure some people traveled as light or lighter than me but some people bring WAY too much crap.  You could bring a car (they had to be parked in a separate area or along the road) and I was shocked how many people did.  Maybe I'm becoming too much of a purist / moto-camping-snob.

Anyway, I experienced a personal motorcycle riding first on my way to the Gas Lite.  I hit a bee that managed to sting me.  I've hit a lot of bugs while riding but I've never been stung.  It got me right in the neck and hurt.  It still itches days later. 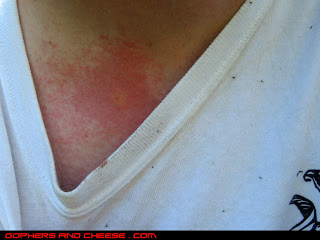 After getting my tent set up, it was early so I went for a ride.  I headed out to the Nauti Hawg in Diamond Bluff and got some lunch.  Then I headed south a little past Maiden Rock.  Again, the weather was perfect! 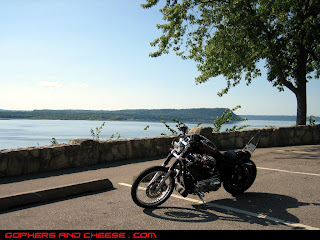 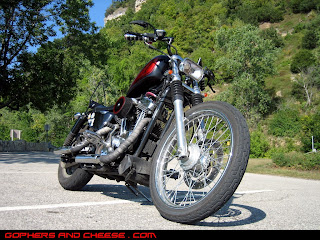 In the evening, I went into Red Wing for dinner (note there's plenty of food at the Gas Lite so you don't actually have to leave).  Heading back to the campground after dinner, it was pretty dark but as I rode down County Road O, it looked like it was snowing!  The swarms of bugs were so thick, it was ridiculous.

Back at the Gas Lite, I enjoyed some music.  Here's the schedule of events for the weekend: 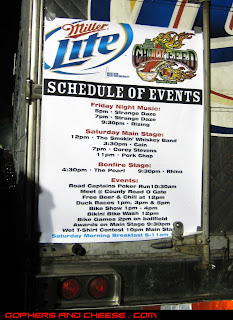 Here is Rising playing that night: 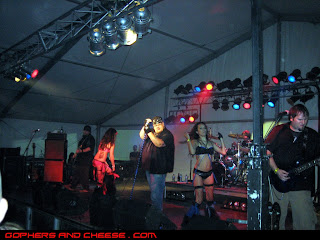 A lot of the bands played covers, mostly rock, and I really enjoyed it.  I was tired and crashed relatively early that night.

Thanks 007! The Kung Fu Tap and Taco drew a much better crowd of bikes but camping was a lot more comfortable behind the Gas Lite.