I had a blast at the DicE / Church of Choppers / Kung Fu Tap and Taco party in Des Moines, IA this past Saturday.

I rode the Sportster.  It turned out to be about 275 miles each way since I took I slightly alternate route.  Des Moines is a pretty much straight shot south from Minneapolis.  It was only the second time I've been to Iowa and it was my first time riding in the state.  First, I took I-35 down to Albert Lea, MN.  I stopped for gas and a cup of coffee at this truck stop and made the decision to jump off the interstate since I-35 is efficient but not much fun. 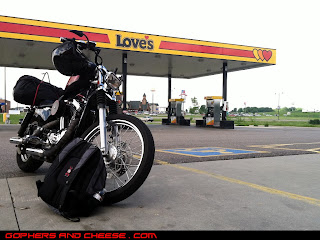 I knew it would add a few miles and a little time but I took US-65 the rest of the way and was really glad I did.  The ride was great.  Speed limits plummet through the tiny towns but in between the limit was 55 and it was easy to fly low - great visibility, good roads, and minimal traffic.  The scenery was cool - lots of farms, wind turbines, and a few hilly spots.  The hills weren't big but I expected Iowa to be really flat and it wasn't.  If you've never seen a wind turbine up close, they're freakin' huge.

Welcome to Iowa - "Fields of Opportunities" 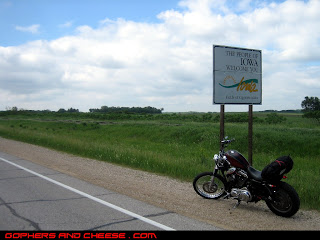 A row of wind turbines. Note the scale in this pic and how massive these things are (my Sporty is in the lower right). 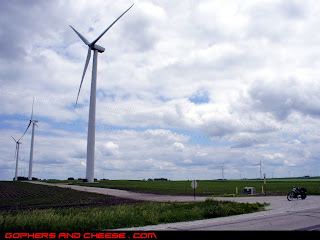 To me it looks like the turbines are shooting out of my headlight in this photo.  It helps if you make a "wa-wa-wa-wa-wa-wa-wa" sound to get the full effect. 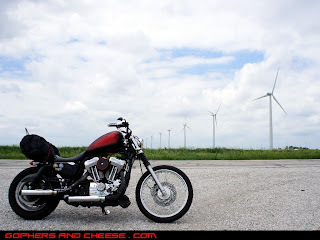 Here are some riding shots.  It was cloudy and rather chilly for June but it never rained that day. 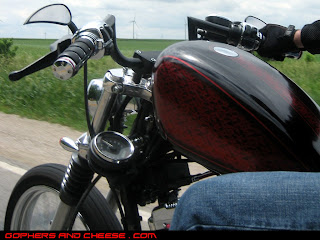 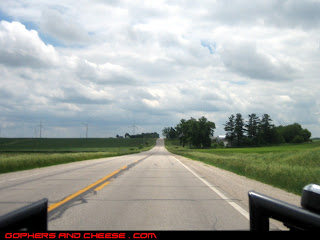 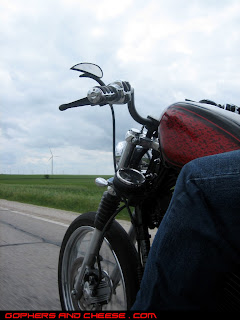 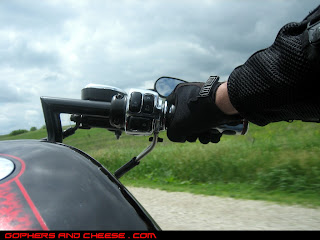 That's all from the trip down.  Come back for multiple posts from the actual party...