As promised, here are some pics of the tank and fender in the sun.  They were just sanded and buffed but they're not waxed yet.  I think a little wax will make them look even better. 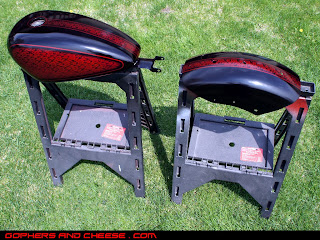 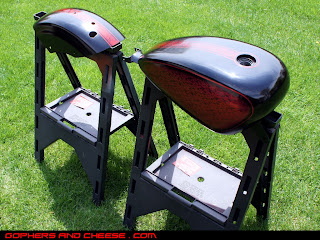 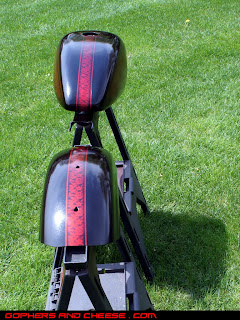 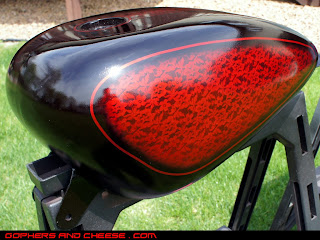 I'm delighted with how they turned out.  Not bad for a rattlecan paint job if I do say so myself.

I will say that the biggest thing I would do differently would be to not use the transparent red over all the whole tank and fender and just limit the use to the lace panels.  In most light, including sunlight, the black parts of the tank and fender look nice and black.  However, under certain light, such as under a flashlight, the black looks like black cherry with a definite dark red tone.  I wonder how it will look at night under streetlights.

The other thing I might do differently is buy a second can of clear coat so I could layer it on and feel more comfortable sanding and and buffing it down to a high gloss.

I can't want to get these things mounted on the bike!

UPDATE 5/16/11: I did end up doing one last round of buffing before installing the tins.  Thankfully I didn't end up going through the clear coat and the buffing made the clear even smoother.  Also, the transparent red isn't perfectly clear.  There's a tiny bit of red glitter in there that I can see in sunlight in the black sections of the tank & fender.  At first I didn't like it but it's starting to grow on me.

I used it and it works great!!
Test on the paint before using though.

Yes, that's what I've used on my tank and fender - great product.

Wow! Looks amazing! Could you tell me how you did that? What did you use as the lace pattern? My Fiance and I are in the process of sanding our bikes now and have our colors picked out, but man, she loves this... I am going with Sienna Mist and Hammered Brown for my 1600 Vulcan Clasic. Please email us at: robnriki@gmail.com
Thanks

Wow! Looks amazing! Could you tell me how you did that? What did you use as the lace pattern? My Fiance and I are in the process of sanding our bikes now and have our colors picked out, but man, she loves this... I am going with Sienna Mist and Hammered Brown for my 1600 Vulcan Clasic. Please email us at: robnriki@gmail.com
Thanks