I've been wanting a different headlight for my Sportster for a while.  The problem has been deciding on the style as I've been torn in a few different directions.

I scored a great deal on this light on eBay and am currently working on fabricating a mount and installing it. 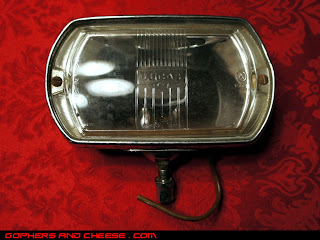 It's a Lucas driving / fog light (it seems to have many names: LR8, SQ8, Square 8, Square8, etc.).  They were designed for cars, not motorcycles, and typically installed on high performance British and American sports cars.

The light does not have a high beam but does have a modern 12V halogen H3 55W bulb so it seems like it should be bright enough (I'll find out once I get the chance to take it for a test ride).  Since I won't have a high beam as a backup, I'll just plan to carry a spare bulb in my tool bag.

The bulb that came with it was dead so I had to replace it.  The light and housing is in rough shape too so it needs some TLC to bring it back some of its original look.  There's a small ding in the trim ring but I'm going to leave that alone.  The chrome has some corrosion, especially on the bottom but some polishing compound and my Dremel took care of most of it.  There is a crack in the bottom but it won't be noticeable when mounted.  I already applied some J.B. Weld to seal it and to hopefully keep it from getting worse.

Here is what it looked like on the inside. 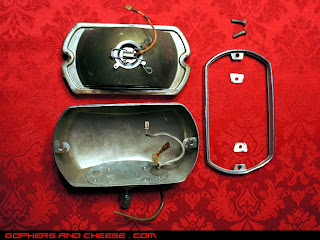 Will this headlight be the one I stick with?  I don't know but I will give it a shot for a while.  I think it looks awesome but it needs to perform too.  My goal is to have it installed and working for First Thursday - only 48 hours away!

Fabulous piece,I do believe you’ve definitely designed a web site I have to come back to daily. Keep it up. restore my headlights san diego