A while back, I decided that I was going to paint my new gas tank myself and the style I wanted was lace panels using the colors red & black.  I have been collecting photos from blogs and websites as inspiration as well as how-tos from various forums.

I painted and airbrushed a lot in high school but that was a long time ago.  Knowing I'm rusty and I've never attempted a lace panel, I didn't want my new tank to be my first attempt.  I wisely bought a piece of sheet metal to practice on.

After priming the sheet metal, I sprayed Dupli-Color Metalcast Ground Coat (Silver) on one side and Dupli-Color Metal Specks Retro Red on the other side.  Both have a glitter to them (too fine to be a true "flake").  The red covers a lot more evenly in my opinion.  It's also smoother - you can almost feel the glitter in the silver. 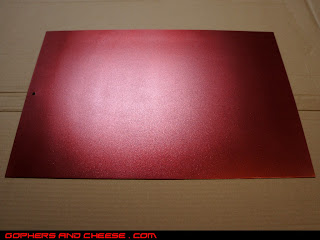 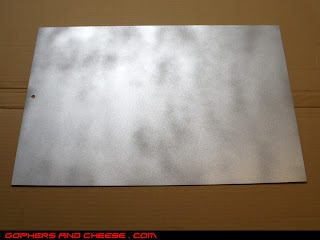 I used some cheap 1/4" tape from the hardware store to lay out some rough lines (I have much better tape for use on the tank).  Before you comment, I did not take a lot of care trying to make them look good - I was more concerned with the painting process.  However, I did learn it's going to be tricky to lay straight lines and smooth curves. 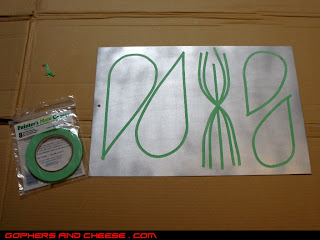 I covered two of the teardrops with blue painters tape. 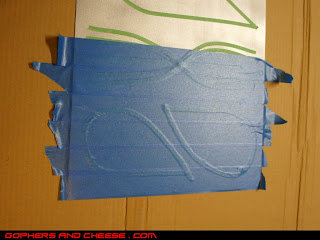 I used a knife to cut out the teardrops.  Some of the paint peeled up when I removed the blue tape so I'll have to be really careful when doing this on the gas tank. 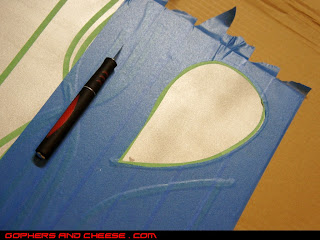 I cut some lace for each teardrop.  I taped one down and I used Krylon Easy Tack spray adhesive for the other. 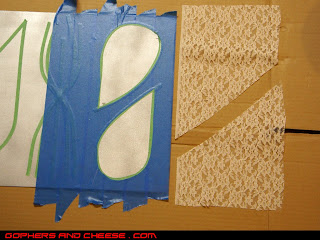 Then I sprayed Dupli-Color Gloss Black Acrylic Enamel over the lace. 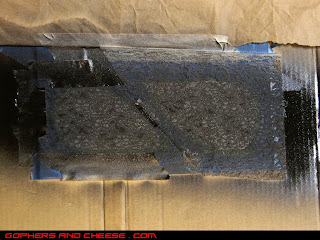 This is what it looked like after removing the lace.  It's difficult to tell from the photo but the lace where I used the spray adhesive turned out much better and the adhesive didn't leave any residue that I could tell.  However, I made the mistake of not spraying from one consistent angle and I lost some detail in both teardrops. 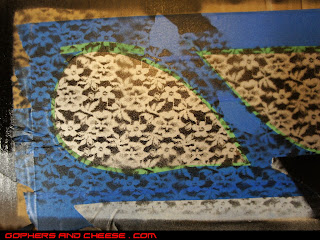 I free-handed fogging the edges.  Again, I wasn't trying too hard here.  I may use an airbrush for this step on the tank.  We'll see. 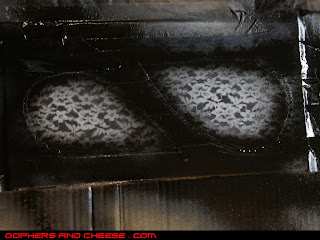 Then I removed all the tape.  Again, more paint peeled up.  I might not have done a great job prepping the sheet metal.  I didn't put much time into it as it was just a test piece anyway. 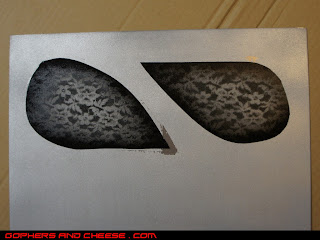 For the other teardrops, I tried two different styles of lace.  I am 90% sure that I'll be going with the flowers but I think the honeycomb lace would look amazing on the right bike.  Honestly, I like both. 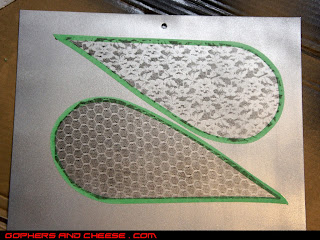 I free-handed both fogging the edges and painting around the teardrops while leaving the green striping tape in place.  This is much closer to what I'll be doing on the tank but I think I'll go with 1/8" tape, not 1/4".  1/4" is a little thick. 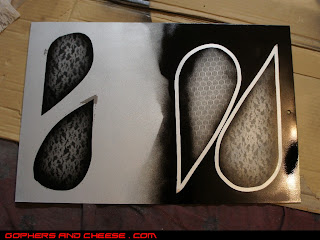 Then I sprayed some Dupli-Color Metalcast Red Anodized paint over the whole thing.  It's a transparent red.  It looks sloppy because I was trying to conserve paint. 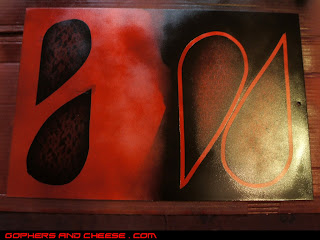 The picture above doesn't do it justice.  This is what it looks like with some light on it: 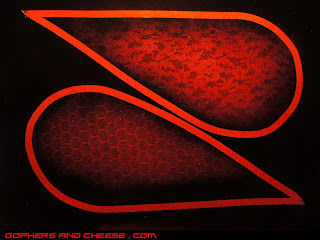 I messed around with the other side of the sheet metal too and I think it looks even better when the same process is followed over the Metal Specks Retro Red (instead of the silver) so I'm going to go that route for the tank.  It produces a slightly darker, deeper red that I prefer.

Email ThisBlogThis!Share to TwitterShare to FacebookShare to Pinterest
Labels: Paint

How far from the lace did you spray? Light coats from a few inches away?

Maybe 12-18 inches? I'm not sure. The main thing was to not go too heavy and not spray at an angle to keep the paint from finding a way under the lace. A little spray adhesive on the lace helped too. Get some scrap and try before painting for real.