After letting the red basecoat dry for about a week, I wet sanded it with 800 grit sandpaper.  Then I wiped it down so I had a nice smooth surface for laying down my pinstripes.  Once the painting is done, the stripes will remain red.  There will also be some red in the lace but the rest will be black.

I bought the tape from Eastwood.  It's 1/8" Blue Fine Line Tape from Norton Automotive.  I bought some 1/4" tape too but found it was too wide for the style I was after.  Again, I was glad I messed around on scrap metal first to learn that.

My goal is to have a large lace panel on each side of the gas tank and then a lace "racing stripe" of sorts running down the tank and fender.

Here's how I laid down the tape: 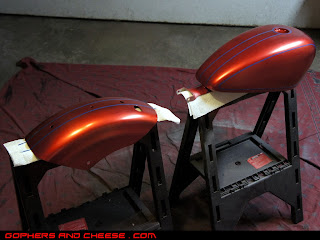 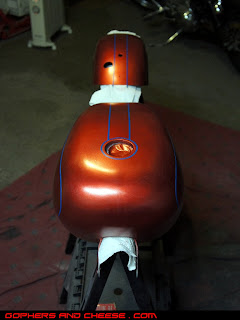 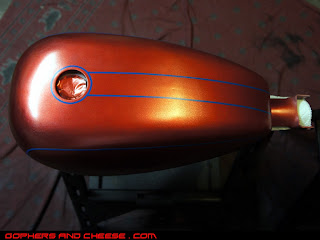 The toughest parts were making parallel lines, doing the circle around the gas cap, and getting the panel on each side of the tank to be as symmetrical as possible.  It was tedious - a lot of laying the tape down, pulling it up, laying it down again, etc.  It's a good thing I was using quality tape.

The only think that didn't work well was the tight radius in the side panels.  On both sides, the tape began to buckle in the same corner. 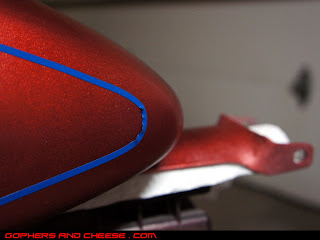 Not wanting to redo both panels after getting them just where I wanted, I cut the tape and added a new section with a larger radius.  That seemed to hold. 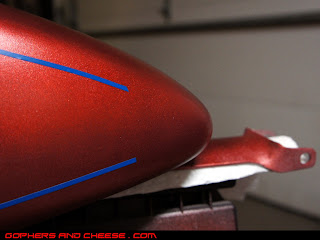 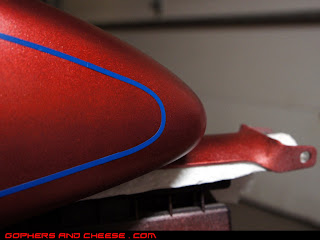