The 2011 Defrost Your Nuts Run (aka Defrost Your Nutz Run / Defrost Ur Nuts Run) was Saturday, April 9th.  I think the route changes each time.  This year had 6 stops and covered about 75 miles.  Given the distance from the Twin Cities and the fact that the run is not a complete loop, I actually rode 200 miles.

Here's the official map from this year's run: 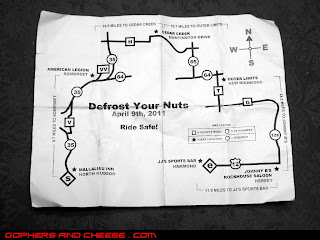 Here's an interactive Google version of the map:

I actually got the date right this time!  See this post for what happened last fall.

It was supposed to get into the mid 60s but the sky was thick with clouds, a little rain, and the sun only peeked through once (briefly).  It was chilly that morning and I don't think the temperature in the afternoon got above the 50s.  However, that didn't stop a good crowd from showing up.

Crowds start to gather at the Mallalieu Inn in North Hudson, WI around 10:00am.  Maps are handed out when you get there. 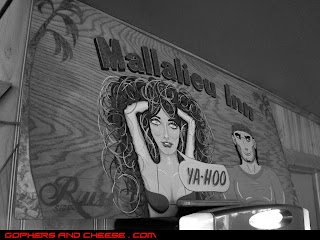 I got there just before 10 and stayed until about 11:30 before heading out on the run.  I think most people leave closer to noon but I like to beat the rush.  There were probably only 20-30 bikes when I got there but it seemed like a few hundred were there when I left.

Here's my Road King in front of the Mallalieu Inn. 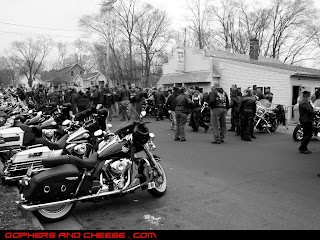 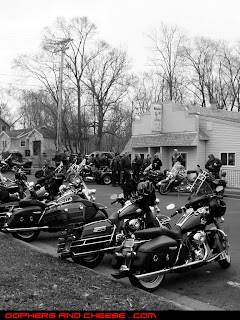 Here are a few shots from The end of Wisconsin St closest to WI-35. 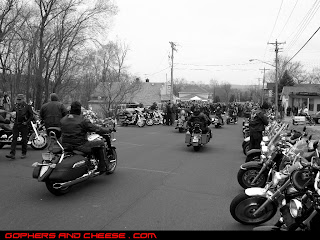 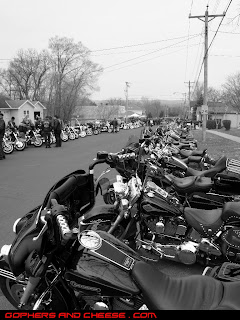 And here's a shot from the opposite end of Wisconsin St. near Starr's Tavern. 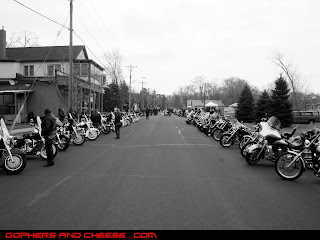 There were also bikes lining the side streets around Wisconsin St. 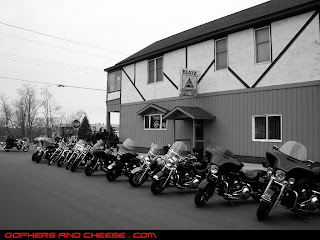 Over the next few days I'll post photos of lots of bikes as well as all the stops along this year's route.