Breaking in a New Tire

Saturday was beautiful!  I really needed to get my Road King's rear tire changed before riding 2-up for the Flood Run in 2 weeks.  I had removed my Sportster's wheels and had the tires changed at Midwest Cycle Supply last year and had a really good experience. 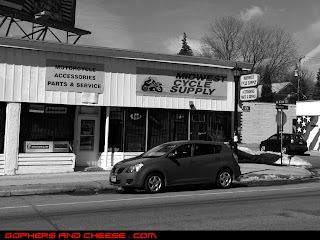 I intended to removed my Road King's rear wheel and bring it in by itself but, after reading the service manual, I needed tools I didn't have and it sounded a lot more complicated than the Sportster.  I decided to ride the bike over and pay the extra fees to have them do everything (it's much cheaper if you remove the wheel yourself).  They opened at 10 and I got there at 10:30, which was a big mistake.  There was already quite a wait.  I was told it would take 1 1/2 to 2 hours so I left it and killed time nearby (Midwest Cycle is just south of downtown Minneapolis and about half an hour from home).  They didn't even get my bike into their garage for nearly 3 hours! I was pissed.  After they did get to my bike, it turns out that I needed new brake pads too so I didn't get my bike back until almost 2:30.  It sucked losing 4 hours of a gorgeous day after being told it would take half that time or less.

When I did get my bike back, I headed straight for Wisconsin.  I took 94 to St Paul and US-10 to Prescott.  I went as far as Diamond Bluff, WI.  Here's a shot of the river from where I was sitting outside the Nauti Hawg.  The water level was much higher than normal - flooding along the rivers is a big issue in Minnesota right now. 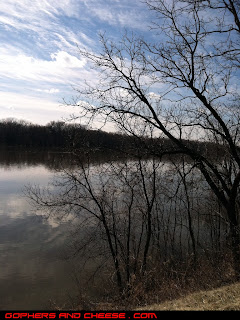 I headed north.  These pics were taken on a side road, just south of Prescott. 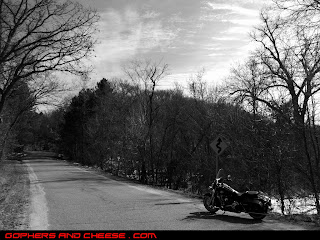 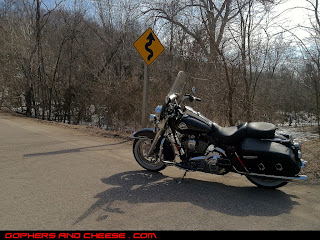 I headed up to Hudson and headed home via 94W.  The ride took away all the stress of waiting 4 hours to get my maintenance done.  It was a beautiful day (it broke 50°F) and there were tons of bikes out.