Because of the tank lift and wire tuck, certain parts of the bike are much more visible than they were before and, honestly, the stock black plastic carb cover looks like crap.  I've reached the point that I don't like adding chrome do-dads for the heck of it anymore but this is an exception.

I found this great NOS chromed billet aluminum cover on eBay.  I don't think it's manufactured anymore.  It's a Landmark "Pearl" CV carburetor cover (part # LM000-95).  I think it will flow really well with the ridges in the rocker boxes on the motor. 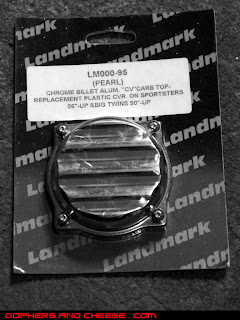 I thought it would be really easy to replace but I should have known better.  The four screws that hold the stock cover are easily accessible and are very easy to remove.  However, there is a bracket for the throttle wires that has two mounting points, one of the four cover screws (small red arrow below) and a screw on the side of the carb (large red arrow below). 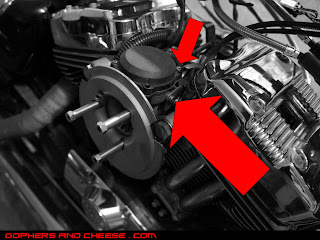 Without loosening the bracket, you cannot get the carb cover off and the bracket screw that goes into the side of the carb is not easily accessible at all.  Maybe there's an easier way, but I am pretty sure I have to remove the air cleaner and carb to get to this screw.  In the process of removing one of the three bolts that hold the air cleaner filter on, I stripped one of the heads.  It took a while to finally get it free but I did it without any collateral damage.  Frustrated, I decided to finish the job later.