This Weekend - Round Barn Run

This was my setup at the Chili Feed - bike, ground tarp, sleeping bag, and tent.  With no sissy bar or luggage rack (because of a bizarre desire to ride the Sporty instead of the Road King), I bungeed all that stuff to my handlebars and had some extra supplies in a backpack. 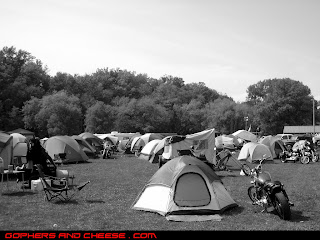 Over the winter I built a sissy bar for the Sportster so I'm hoping to strap all that stuff to it this year instead.

If you wonder what all that stuff looks like strapped to handlebars, it's somewhat ridiculous but surprisingly stable.  Here's a pic from a different trip where I packed the same way: 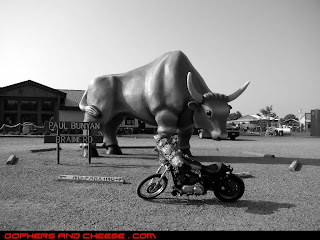 What I have gathered about the Round Barn Run (mostly unconfirmed) is that it is a guided tour (150-200 miles) that includes about a half dozen historic round barns in the area and a few other stops.  Back at the campsite (behind the Gas-Lite Tavern in Ellsworth, WI), there is camping, music, food, and beer - all included with admission.  Basically, I am expecting a somewhat scaled down version of the SCVR Chili Feed.  What the whole event actually turns out to be, I won't know until Saturday but I've been looking forward to it for months.

Email ThisBlogThis!Share to TwitterShare to FacebookShare to Pinterest
Labels: XL1200C