It has been cloudy and rainy here.  Yesterday was one of the nicest days in a while.  I went for an evening ride and stopped at Bob's.  I was talking to another Sportster rider who asked the year of my bike (2004) and how many miles I had on it.  I said, "27,000," and, without even a pause, he said, "you work too much."  I loved that response.  I didn't mention the fact that I had another bike but I don't think the combined mileage would have mattered.  I wish I could remember the number but he said he had somewhere between 100,000-200,000 miles on his.  I think it was closer to 200K.

The weather was so nice that I decided to take a spin around the lakes.  I cut over to Lake Calhoun and rode around the lake.  The sun had just set but the sky was still light and had shades of orange and blue.

Here's a shot in front of Lake Calhoun with Minneapolis in the distance. 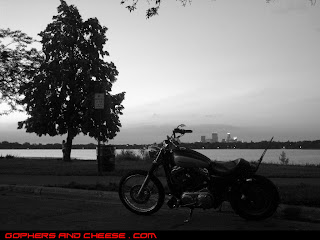 I didn't have much of a plan and decided to ride around neighboring Lake Harriet too.  The sky was beautiful and the foreground was silhouetted against it. 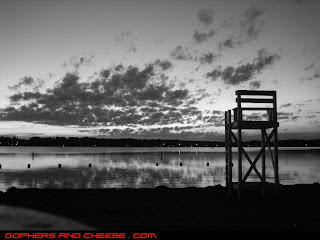 Riding along, the last thing I expected to see in the lake was this.  I had to find a place to park so I could walk back and take some pics. 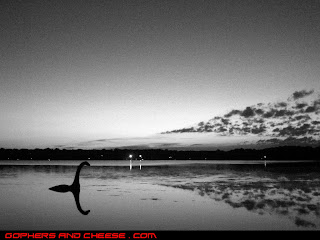 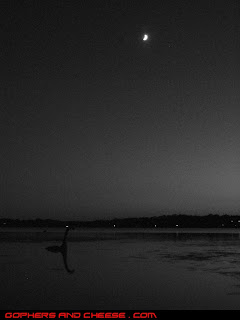 The lake creature's name is Minne and you can learn about her here.