My first ride of the year was on March 6th, a full month later than last year due to a very cold February.  I rode down to Red Wing, MN and back (roughly a 150 mile loop).  It was a beautiful day with no clouds in the sky.  The high was right around 40.  There was a lot of snow along the sides of the roads but the roads were relatively clean with only a little salt residue left and no significant sand or gravel.

This picture was taken from Point Douglas Park on the Minnesota side of the mostly-frozen St. Croix River.  Prescott, WI is in the background. 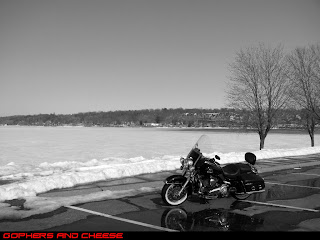 This is a drive-in located in Cottage Grove, MN along US-10.  It is still in operation and is open during the warmer months. 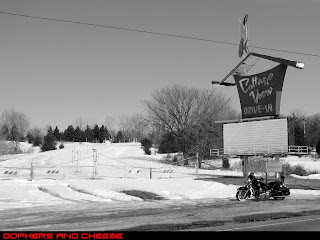